Beyond the Border (Swedish title: Gränsen) is a 2011 Swedish World War II film directed by Richard Holm. Set in 1942 at Swedish-Norwegian border, Sweden remains neutral with Germany, but two Swedish soldiers leave their post at check-point because they want to see the German soldiers. Soon Swedish soldiers were captured by German troops. Lt. Aron Stenstrom is forced to go on a secret rescue mission because one of the missing soldiers was his brother.
The following weapons were used in the film Beyond the Border:

Luger P08 is the main sidearm of Swedish and German officers.

Sven Stenström fires the Luger P08 at a German soldier.

Numerous German soldiers are armed with the MP40. Wille Järvinen and Egil also use this weapon.

Nebelhandgranate 39 and MP40 on a rag.

Several Sten Mk II submachine guns can be seen on the wall of Egil's bunker.

The 1896 Swedish Mauser is the main weapon of Swedish soldiers. Maj. Adolfsson, Uno Larsson (Robert Follin) and Hagman use these rifles fitted with telescopic sights.

A Swedish soldier fires his rifle at German soldiers.

Swedish soldiers with their 1896 Swedish Mausers at the range.

Hagman and Uno Larsson with their scoped 1896 Mauser rifles.

German soldiers are armed with the Karabiner 98k. Egil and Sven Stenstrom also use this weapon.

Sven Stenstrom fires his captured Karabiner 98k. Note that this rifle has a hooded front sight.

An MG42 can be seen outside a German building.

German soldier with the MG42. 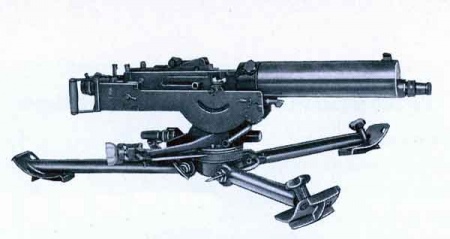 Model 24 Stielhandgranates on a wall inside Egil's bunker.

The Nb.Hgr. 39 (Nebelhandgranate 39) smoke hand grenade is a version of Model 24 Stielhandgranate. This grenade can be seen in Egil's bunker.

Nebelhandgranate 39. This is a later production model with grooves added to the handle so that it would not be mistaken for a Model 24 Stielhandgranate in the dark.

Nebelhandgranate 39 and MP40 on a rag.

Egil used Molotov Cocktails during the operation to free the captive Sven Stenstrom.

Molotov Cocktails on a rag.
Retrieved from "http://www.imfdb.org/index.php?title=Beyond_the_Border&oldid=1475083"
Categories: