Archer is a spy/workplace comedy centered on Agent Sterling Archer, aka "Duchess." He's regarded as "the world's most dangerous spy," despite his narcissism, his alcoholism, his irresponsibility, and many, many, unresolved mother issues. The show premiered in 2009, followed by a full first season in 2010, with a full season in 2011. The shows features the voices of H. Jon Benjamin as Sterling Archer, Aisha Tyler as Lana Kane, Chris Parnell as Cyril Figgis, Jessica Walter as Malory Archer, Judy Greer as Cheryl/Carol/Carina/Cristal, and Amber Nash as Pam. It was created by Adam Reed, who had previously made Frisky Dingo and Sealab 2021 along with Matt Thompson, who is also the executive producer. Reed also has written every single episode, which allows the series to have ongoing in-jokes, like Lana's freakishly large hands, Archer's obsession with Burt Reynolds, and Malory's promiscuity.

Many details about the show are deliberately fuzzy, especially the time period that it is set. The clothing, furnishing and cars would indicate that it is set in the past, but modern cell phones and pop culture references ("Call Kenny Loggins, because you're in the Danger Zone,") would indicate that the show is set in more recent times, despite the fact that the Soviet Union still exists (albeit coexisting with an independent Turkmenistan,) with Josef Stalin still in power (at least during the first season.) Reed has admitted that he had intended the show to be set in the sixties, citing the influence of Mad Men, but wanted cell phones because he didn't want to constantly have to have the characters find pay phones. Cultural attitudes are also more modern, with Malory citing diversity requirements, and openly gay characters.

The following lists the seasons of Archer:

The ISIS armory has a large collection of weaponry on its walls, much of it accurately rendered, except for scale. The Sa. Vz.61 Skorpion for example, is ludicrously large. 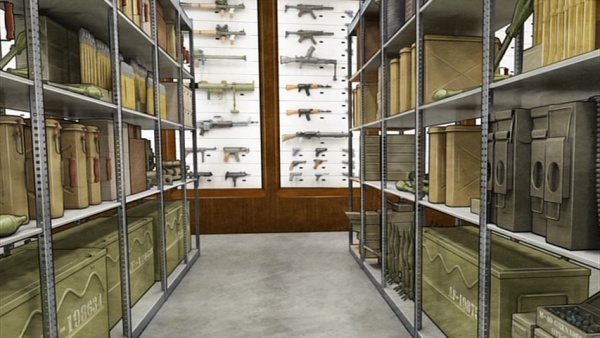 This is the widest shot of the armory, from "The Rock" (S01E08). From top right, excluding the pistols, which are too small in this shot, there are two MP5SD3s, a Bren gun, two AK-74s, a Lewis gun, and pistols that are covered below. From top left, there are two RPG-7s, a FIM-92A Stinger, a PIAT, an M60 machine gun, an MP40, a ridiculously over-sized Sa. Vz.61 Skorpion, an Uzi, Heckler & Koch P7M8 and a Walther MPL. 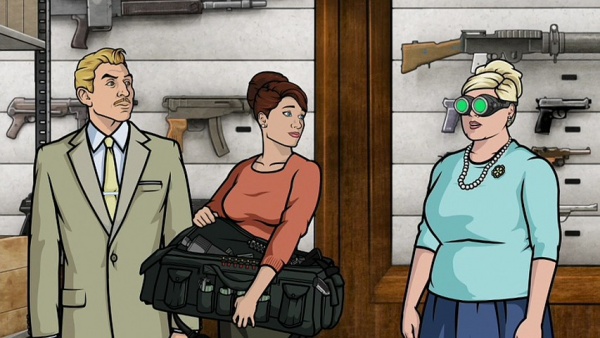 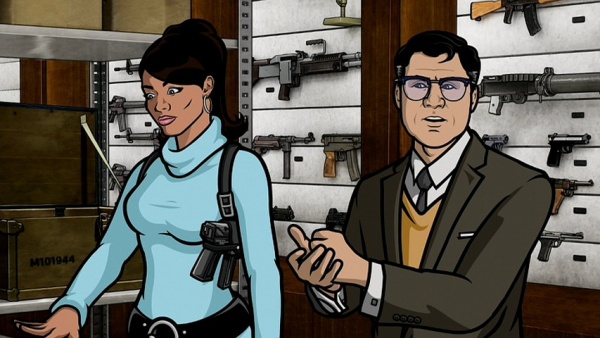 This shot from "El Secuestro" (S02E10) shows a bit more. To the extreme left, there appears to be some M16A2 rifles, or possibly some M16A1s with A2 handguards. You can also see Lana's TEC-9 under her shoulder and what looks like the front view of a Walther MPL
. 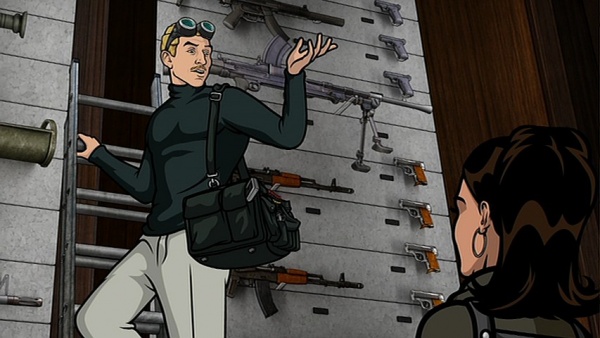 This shot from "Bloody Ferlin" (S03E09) shows another angle of the first shot.

Archer weapon in the first season was identifiable as a Walther PPK, but still lacked certain identifying features. 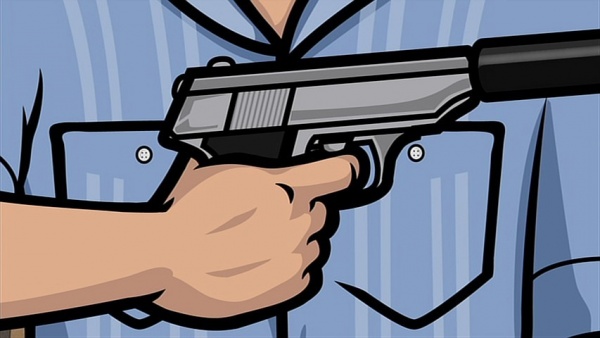 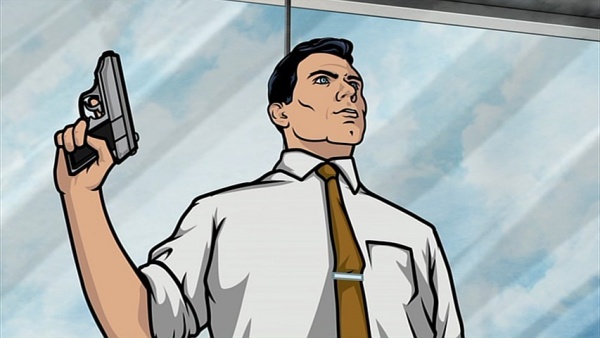 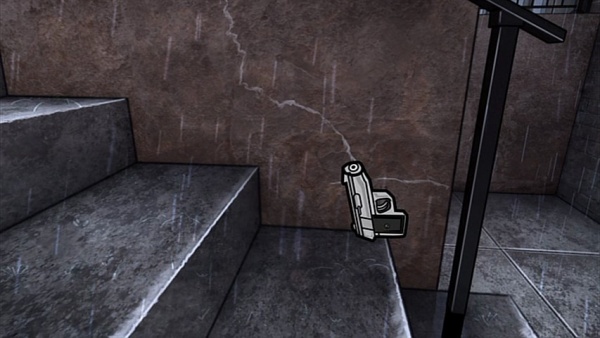 A drunken Archer drops his pistol on stone steps in "Dial M for Mother" (S01E10). It resembles a pistol a child would draw.

The animators did their homework between seasons 1 and 2, adding more detail and cycling animation. 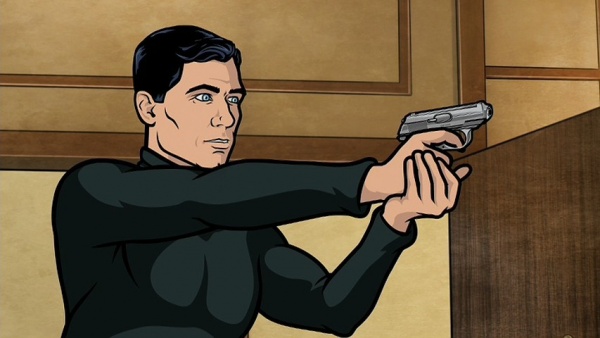 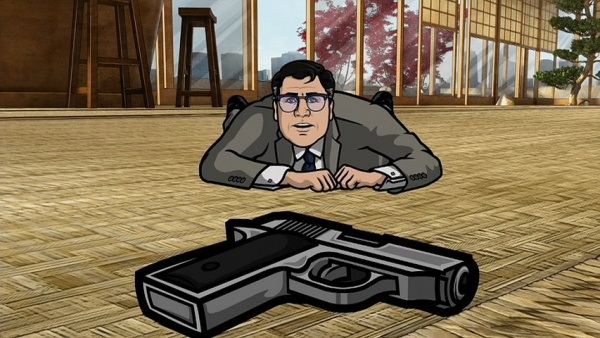 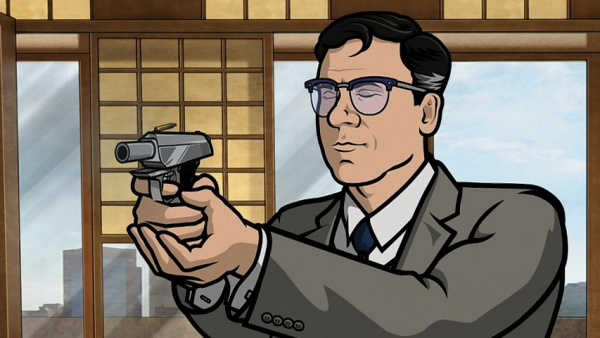 Cyril fires Archer's PPK in "Tragical History" (S02E06). In season 2, the animators added the cycling animation. Unfortunately, the spent shell casing flying out appears to be from a rifle. 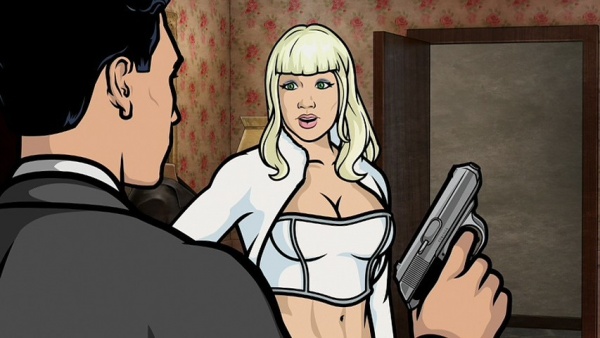 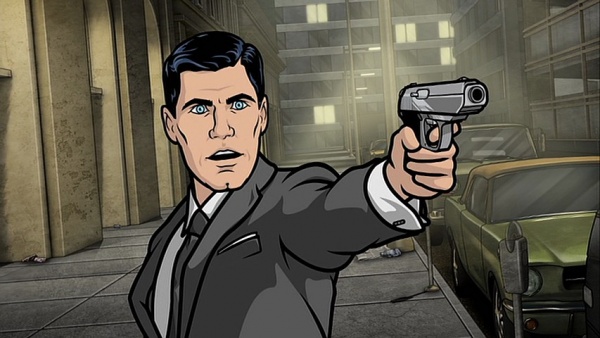 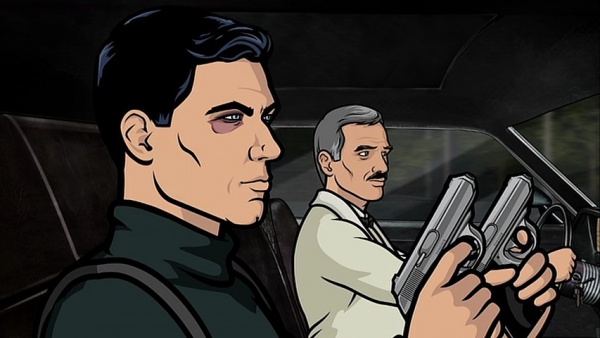 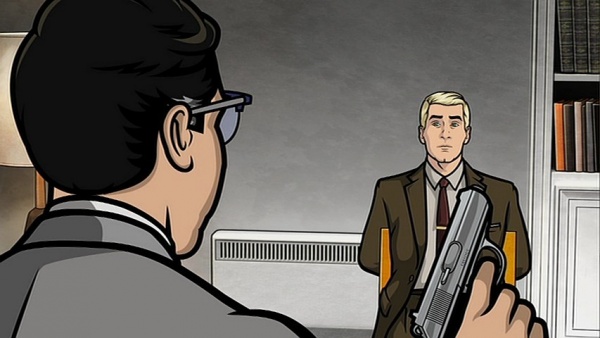