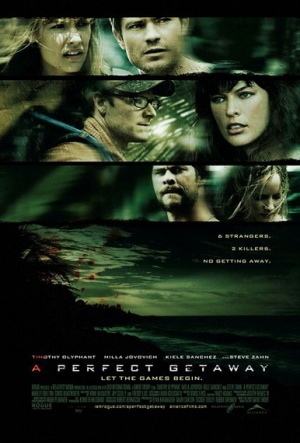 The following weapons were used in the film A Perfect Getaway:

A Colt Commander is seen in the hands of both Nick (Timothy Olyphant) and Cliff Anderson (Steve Zahn) in the film.

The pistol is fired from atop a cliff.

An Olympic Arms rifle similar to the Bushmaster XM15 "V-Match" fitted with a scope is seen used by a Kauai police sniper in the climax of the film.

The sniper takes the rifle off "Safe". Note the Olympic Arms imprint.

The sniper loads the mag into the rifle.

Taking aim with the rifle.
Retrieved from "http://www.imfdb.org/index.php?title=A_Perfect_Getaway&oldid=786244"
Categories: