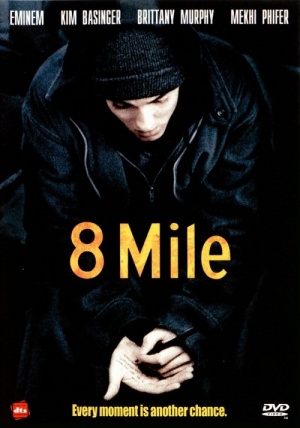 8 Mile is a 2002 semi-biographical film based on the actual life of Eminem, who stars as Jimmy "B-Rabbit" Smith Jr., a young white rapper trying to get respect, money and finally be able to change his life. The film's cast includes Kim Basinger, Brittany Murphy, Anthony Mackie and Mekhi Phifer and was directed by Curtis Hanson (L.A. Confidential). 8 Mile would subsequently gain critical acclaim, and Eminem eventually would receive the Academy Award for Best Original Song.

The following weapons were used in the film 8 Mile:

Papa Doc (Anthony Mackie) carries a Beretta 92FS throughout the film. He only pulls it out twice to scare the members of the "313", but he's never seen firing it.

Papa Doc (Anthony Mackie) pulls out his Beretta at the Chin Tiki parkway.

Cheddar Bob (Evan Jones) pulls out a nickel Smith & Wesson Model 10 that belonged to his mom during a fight between "313" and "Tha Free World". He accidentally shoots his leg while trying to holster the revolver.

Opposite side of the S&W Model 10.

During a drive-by, B-Rabbit (Eminem) and his friends use a Paintball gun to scare the pedestrians.

David "Future" Porter (Mekhi Phifer) shoots at a building to scare the bystanders.