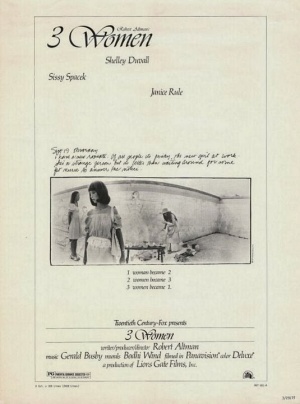 The following weapons were used in the film 3 Women:

Edgar Hart (Robert Fortier) carries a nickel-plated Single Action Army with ivory grips, which he jokingly draws at various points of the movie.

The revolver's grips being shown.

Characters are seen handling Colt Woodsmans at the shooting range during various points of the film.

A background character on the right is seen holding a Woodsman with the slide back.

At the shooting range, a man is seen in the background handling a Colt Python.

The man is seen holding the Colt.

In the background of the shooting range, people are seen handling Madsen M50s.

The Madsens are seen in the background.
Retrieved from "http://www.imfdb.org/index.php?title=3_Women&oldid=979359"
Categories: