1612 (Original title is 1612: Хроники Смутного времени; 1612: Khroniki smutnogo vremeni, literal 1612: Chronicles of the Dark Time (or 1612: Chronicles of the Time of Troubles)) is a 2007 Russian historical epic movie, directed Vladimir Khotinenko. This is the second movie about Time of Troubles, the first being Minin and Pozharsky. The story takes place during the end of Time of Troubles, a period of when political upheaval, anarchy, and foreign invasion plagued the Tsardom of Russia. It is a mix of historical events and fantasy elements.

The following weapons were used in the film 1612:

Swedish mercenary carries the pistol on his belt.

...to kill an Orthodox priest.

Brigand Osina (Aleksandr Baluev) carries an anachronistic Flintlock Pistol throughout the movie and fires it many times. Voevoda of the Navolok (Marat Basharov), Ivan Nikitich (uncredited), and several mercenaries also use flintlock pistols during the siege.

Good view of the flintlock.

Osina in ambush with his flintlock pistol.

Ivan Nikitich covers with his pistol.

Nearly all Polish and Swedish mercenaries, as well as several Russian soldiers and militia (irregular soldiers), can be seen armed with Matchlock Muskets. One can be briefly seen in the hands of Kostka (Artur Smolyaninov).

Polish mercenary with a matchlock musket.

Close view of the matchlock.

Musket at the center in the hands of a Swedish mercenary.

Polish mercenaries fire their matchlock musket during the siege of Navolok.

Polish mercenaries uses Fuse Grenades during the siege of Navolok. 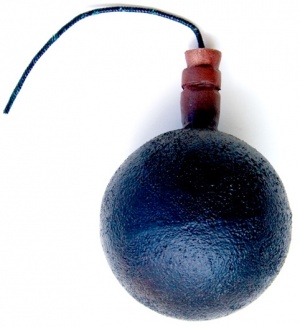 Activated grenade a second before explosion.

Two improvised grenades on a catapult.

Andrei (Pyotr Kislov) made a Leather Cannon. It's historically correct. This was an actual cannon.