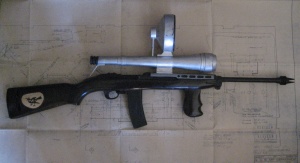 The THRUSH Carbine was a modified M1 Carbine created for the television series The Man from U.N.C.L.E., primarly seen in the hands of enemy THRUSH agents. The second episode of the series had THRUSH agents using real M3 Carbines, which the THRUSH Carbine appears to be based on, with a replica IR scope, custom stock, and duckbill flash hider.

The THRUSH Carbine and variants can be seen in the following films, television series, video games, and anime used by the following actors: