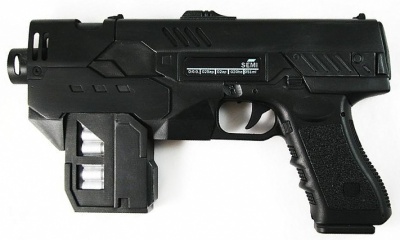 Resin prop replica of the Lawgiver. From Yourprops.com.

The "Lawgiver Mk. II" is the standard pistol carried by the Judges in the 2012 film Dredd. Prop wise, the Lawgivers seen in the film appear to be Glock 17 pistols housed in futuristic shells. The weapon's various fire modes include: Rapid Fire (fully automatic), Armor piercing rounds, Incendiary rounds (these appear to be white phosphorus), Stun (A non-lethal electric charge that incapacitates the target), "Hot Shot" - a superheated round capable of melting flesh and "High-Ex" (High Explosive). *Silencer Mode. The Lawgiver features a built-in suppressor that retracts into the frame when not in use.

Visit the discussion page to see additional images involving the rendering and building from the base gun to the final prop.

The (Dredd) - Lawgiver Mk. II and variants can be seen in the following films, television series, video games, and anime used by the following actors: