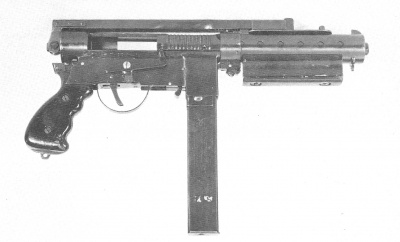 The Welgun is a British prototype submachine gun developed by Birmingham Small Arms during World War II for the Special Operations Executive. Designed and trialed in 1943, the Welgun performed poorly in the trials and was quickly abandoned.

The Welgun and variants can be seen in the following films, television series, video games, and anime used by the following actors: