MacReady (Kurt Russell) and some other survivors are seen using dynamite bundles to combat the alien. Most notably when MacReady grabs a bundle so nobody will attack or burn him. The survivors fashion the dynamite to their chests with a improvised holder. 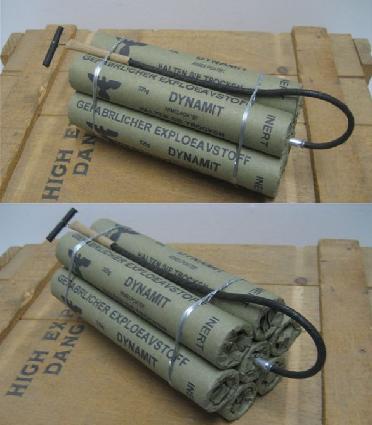 A bundle of German WWII-Era dynamite with fuse.

MacReady holding a flare and a bundle of dynamite.

MacReady holding a bundle of dynamite as an insurance policy. 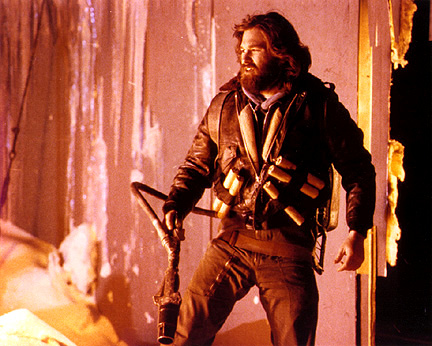 MacReady with his M2 Flamethrower and dynamite in some kind of improvised holder.

I have to add on the DVD-Laserdisc commentary Carpenter states that it was working Vietnam era flamethrower. They had two. One that worked and one that didn't. The one that did used compressed karosine as a fuel. Carpenter literally had the LAFD standing by when they burnt a "Thing".

Don't know about Palmer's rig. Looked like a de-iceing wand from the 70s.

why dose an arctic base have Flamethrowers and shotguns? Rex095

The Flamethrowers are used to melt the ice off of aircraft wings and helicopter blades so they don't crash and I'm not sure, but the shotguns may be used for killing dangerious wildlife. Those seals and penguins are pretty damn dangerous! - Kilgore 01:52, 27 July 2010 (UTC)

Hang on, why do they have military-issue flamethrowers for de-icing?! Surely you'd want a simple gas powered model like Palmer's, because a military flamethrower with liquid fuel's just gonna set everything on fire and destroy it!--Leigh Burne 03:14, 25 July 2012 (CDT)

Rifles and shotguns in Anarctica

While the most logical reason would be to use as hunting weapons in case they ended up stranded (like say a blizzard or other bad weather conditions), and are running low on food.

Also, they could be used as self-defense, as there is one animal in Antarctica that has the ability to kill a human, the leopard seal. Of course, I highly doubt the research station was near the coast, but you never know. Leopard seals can get to be about 8-11 feet, and 600-1100 pounds. There are three documented attacks all in Antarctica, and one was fatal. So yeah, they are pretty nasty. - User:1morey March 4, 2-13 9:52 AM (EST)