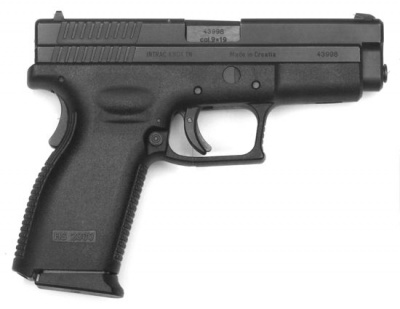 HS2000 original model, which is no longer produced, note the absence of the rail - 9x19mm 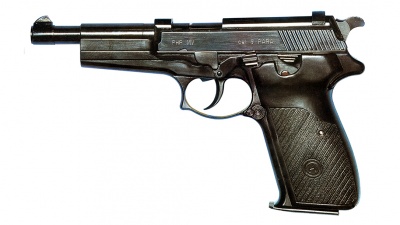 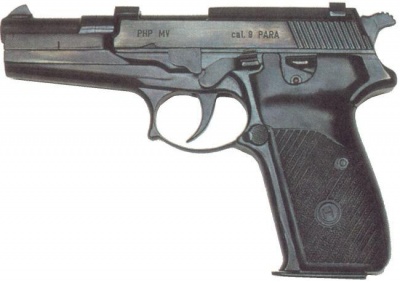 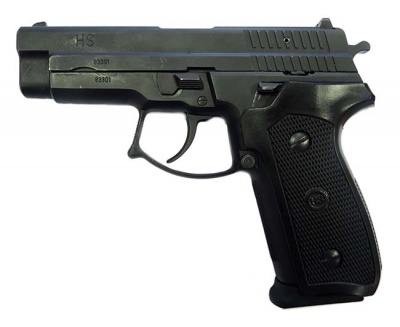 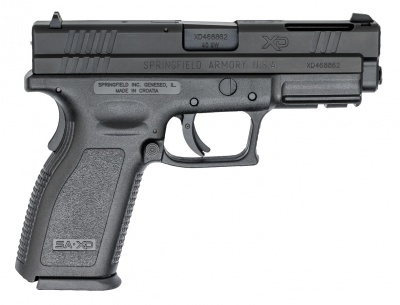 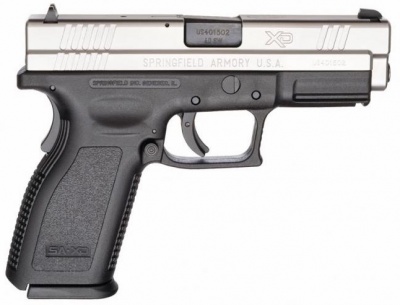 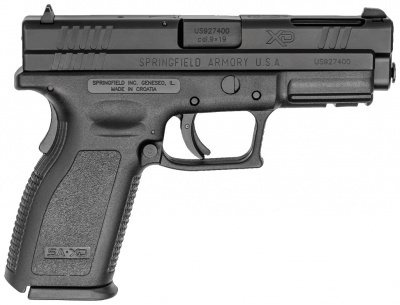 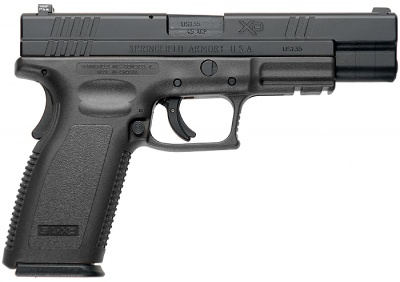 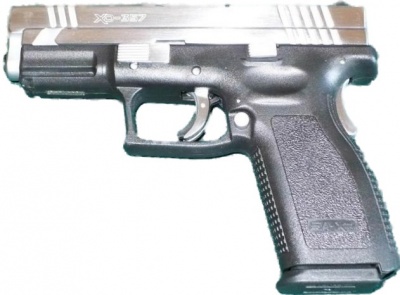 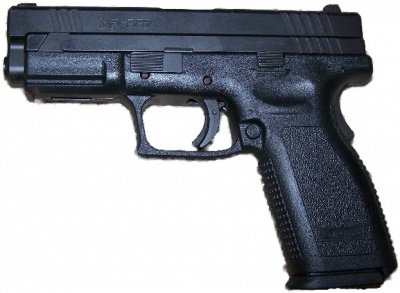 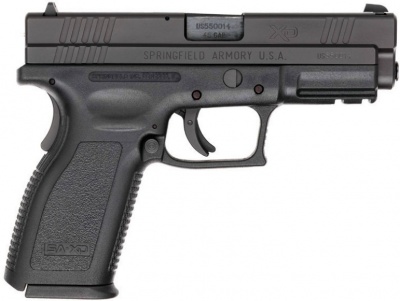 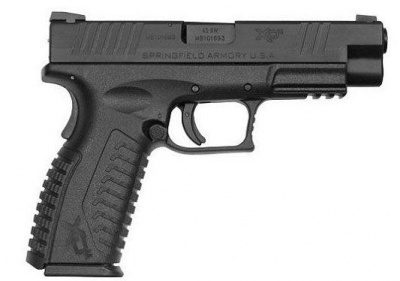 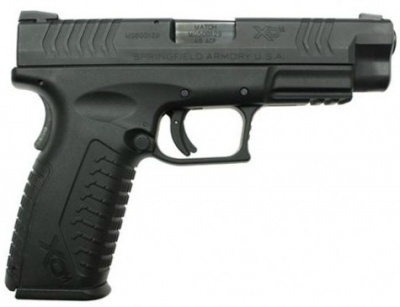 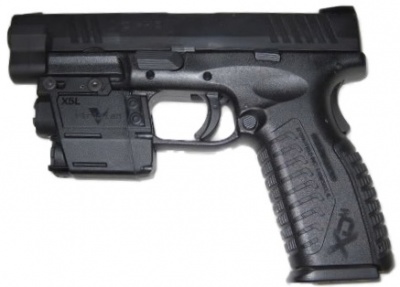 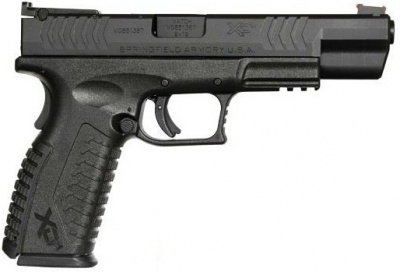 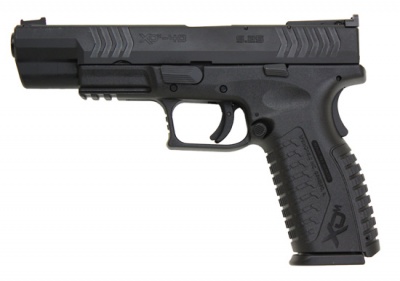 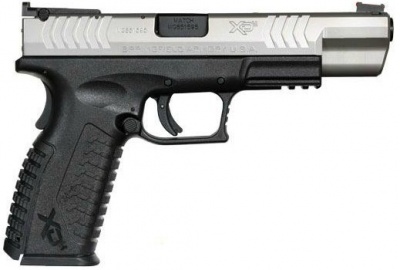 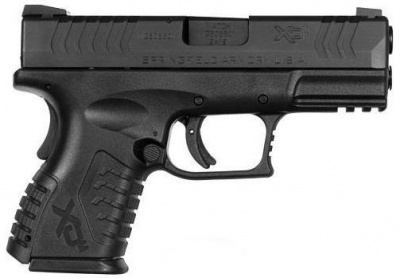 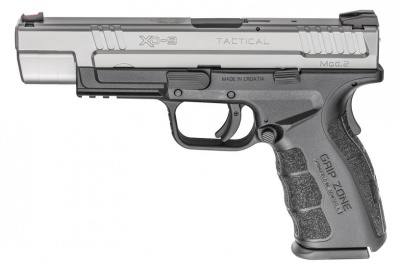 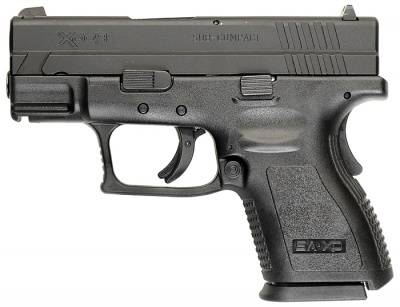 This pistol is overpriced. The same gun made by Croatian IM Metal company costs like $150 less than the Sprinfield model.-S&Wshooter

Pardon my asking, but...why are you so passionate about guns you hate that you feel a need to post on every page for them and express how shit you think they are? The forum is a better place to discuss this. -MT2008

Seconded. It almost seems like you're just trying to troll.

I think this gun is really cool and deserves more respect and acclaim.

The NRA gave it their Handgun of the Year award. What more acclaim do you want it to get?

A lot of the new polymer, striker-fired guns are referred to as Glock clones but most have clear differences and improvements that separate them from Glock pistols (the S&W Sigma excepted). With this weapon however, I've never heard what specific features differentiate it from Glocks and whether those differences offer any improvement over Glock pistols. Could someone provide some comparison information about these two weapons?

I meant mechanical differences. For instance, the Walther P99 had a DA/SA trigger (at least at first), the Ruger SR9 had a manual safety, the Taurus PT 24/7 had both features, and many guns have double-strike capabilities. These are all features that differentiate these Polymer, Striker-fired guns from the Glock series. Does this weapon have any features that diverge from the Glock other than minor differences like grip style?

Thanks, I didn't know about the grip safety, but looking at the images now I feel like an idiot because it's plainly obvious.

In addition to the afore mentioned grip safety, an important difference is the loaded chamber indicator. On a glock it's basically the extractor. If a shell case is in the chamber, the extractor is out. On an XD, the loaded chamber indicator is on the top of the slide. Just by looking at the gun (or running your hand along the top) you can see if a round is in the chamber. Interestingly enough, this means you can tell if an XD has a round in it when it shows up in movies. For example, the movie "Lucky number Slevin", the main character "Good Cat" played by Bruce Willis uses several of these pistols. You can also tell they are unloaded a few times because the loaded chamber indicator isn't in it's "up" position.

Also, the XD has a cocked striker indicator on the rear of the slide (where the hammer would be on a conventional pistol). Glock's do not. This means that you can tell if the striker is cocked on an XD, and you can't on a glock. Glocks disassemble differently also (glock uses a slide bar, and XD uses a lever). You can take a current XD apart without pulling the trigger also, which on a glock, you have to do to lower the striker. So, in conclusion - yeah, an XD is pretty different than a glock.

I know the Glock marketing materials claim that the trigger is a cocked striker indicator, but that's pretty ridiculous. By that logic, old single action revolvers also have a cocked striker indicator because the trigger position moves when the hammer is cocked. The reason trigger position can't be relied on is because trigger jobs are very common - to reduce take up, over travel, reset, pull force, etc. The XD has a pin that sticks out when the striker is cocked. Not only is it visible, it's tactile. Relying on the visual trigger position of a pistol to determine if it's cocked is a good way to get shot.

Also, the ammo capacity lists for these pistols is off. The 9mm version of the XDM holds 19 rounds in the magazine - or 20 with a loaded chamber.

Actually, the ammo capacity is correct, as this page is technically for the XD(which does indeed hold the amount listed on the page), the higher capacity XDm series came later. DKS01 17:03, 11 May 2011 (CDT)

The XD striker is fully cocked and considered a single action, meaning it cannot be used in some pistol competitions. This is how the ATF classified it. the glock is only partially cocked and thus considered double action. This is one reason the XD trigger feels better, it is single stage, trigger releases striker. The glock is two stage, cock then release. User:k9870

BTW, the HS2000 may cost less.....in Croatia. There is importing, import tax, the cost of shipping, logistics, etc, and springfield throws in a lifetime warranty. So I say its a good value, real good.

I was shopping for a handgun about a year and a half ago. I compared the G21 and the XD45, and ended up buying the XD because it felt better in my hand and was about $50 cheaper. The grip safety and the loaded chamber indicator are a plus. --redram355 13:21, 14 January 2011 (UTC)

The Grip safety is the downside to me.....unnecessary complication. Sure it works but its something that could go wrong. Like Smith and wessoon internal locks.....doesnt affect anything but it COULD. One piece of grit getting in there can hang up the safety. The plusses are better stok sights (metal 3 dot vs plastic u sights) and MUCH more conforatable grip, and better (to me) trigger.

In the name of all Croatian Gun Nuts (including me): do we really need to have this page of pistols named "Springfield Armory XD", the original name is HS2000, not "XD" (it's just an American designation of the HS). It's not like you're gonna name the Beretta 92 pistol series as an "M9", but by it's original native name Beretta 92(F/FS)... I don't know why's everybody telling that "it's an American Springfield XD pistol", NO, it's Croatian. I was recently reading a daily magazine, the "XD pistol" was featured in it, but there was no apsolute way of mentioning that it's a Croatian gun. TitaniumAlloy (talk) 17:15, 13 July 2013 (EDT)

I don't think there are any mechanical differences, but they are branded differently. I've uploaded an image in case any of them DO show up in film. --Funkychinaman (talk) 11:20, 14 July 2013 (EDT)

Also, as this is an American site and the majority of media is American in origin, it has generally been the standard to title weapons by their American import name, as that is generally what more people will be familiar with. --commando552 (talk) 13:15, 20 July 2013 (EDT)

U.S. made & Croatian made

Correct me if I'm wrong, but I noticed some differences between U.S. made and Croatian made XDM:

Do we really need images of all these other XD variants? Only a few types seem to have been used in anything thus far. StanTheMan (talk) 15:16, 3 November 2013 (EST)