Taken from the main page.

The Scope could be a Laserpointer. Look at the Wires.

Definitely a laser sight. A scope would have a much wider lens on the other end. All of the detectives in this movie seem to carry pistols with laser sights.

But the desert eagle have the wires in a strange position, the spent shells would hit the wires, or not ? -Schiebi86-

Change your images to JPEGS not PNGs

Who ever is doing this is making this page REALLY SLOW TO LOAD. I've given up already and my connection isn't that slow. On three other computers, people just gave up and left this page because it was too slow to load. Those images range from 500-700 KBs EACH!!!! Stop with the PNGS. Use some sort of image editing software and convert it to JPEG! MoviePropMaster2008 19:41, 11 January 2009 (UTC)

You can just go to MSPaint or any other program, open up the image, hit "Save As", and then save it as a JPEG from there.

Also, I see that you use VLC Media Player to take your screencaps. In the future, you don't need to convert images at all; VLC will take them in JPEG if you work with the settings. All you have to do is go to "Settings", then "Preferences", and then "Video". You'll see an option that reads "Video snapshot format"; just change it from PNG to JPEG and from now on, any movie you watch and screencap with VLC will have shots saved to JPEG format. -MT2008 20:48, 11 January 2009 (UTC)

What was the handgun carried by Bill Paxton. Like almost every other handgun in the movie it has a laser sight on it but I could never really get a good look at it. I think it might have been a 1911 but I'm not sure.

Did anybody notice during the penthouse scene one of the Jamaicans was wielding a pair of gold plated revolvers with ivory grips does anybody know what they are?

I've added two new entries. One featuring the Jamaican gangster with his golden revolvers, the other shows a variant of AK47 which I cannot identify. So if any of you can learn anything from those photos be my guest and try to identify them :) Dudster32 (talk) 12:28, 26 February 2013 (EST)

Used by Peter Keyes' (Gary Busey) government agents who attempt to hunt down the Predator in the abattoir. It has side-by-side barrels.

Here are a few shots of the unidentified doublebarrel rifle. Note the recoil/flash dampener thingies. My amateur view is that this is a hollywood-made weapon and not an existing one. Dudster32 (talk) 12:37, 26 February 2013 (EST) 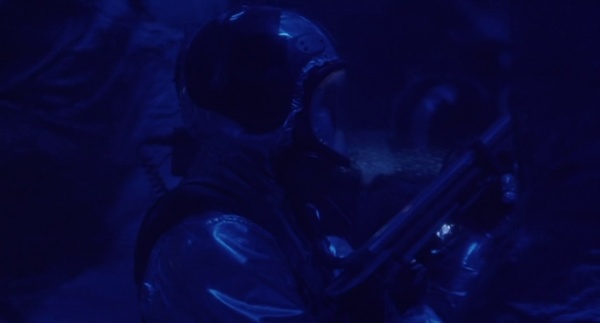 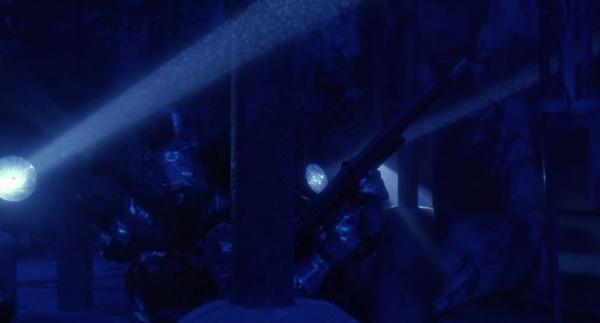 Rifle seen in the hands on the man to the right 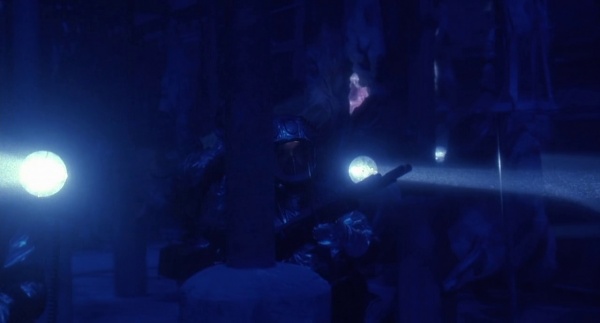 Closeup of the two barrels in the center 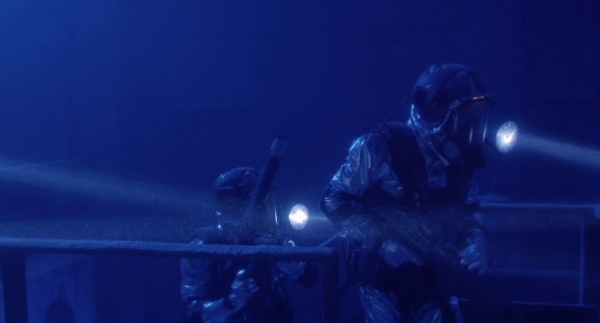 The two-barrel weapon bringing up the rear.

The rifle was used again in one of the Cybertracker movies, looks like though. 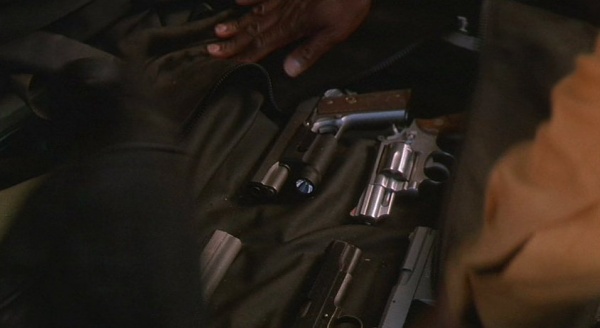 It's ID'd as a standard-size Series 70, but the front dust cover and slide look a wee bit short - I think this is a Commander variant. It looks identical in length to the other Commander below it in the frame. StanTheMan (talk) 18:40, 22 March 2015 (EDT) 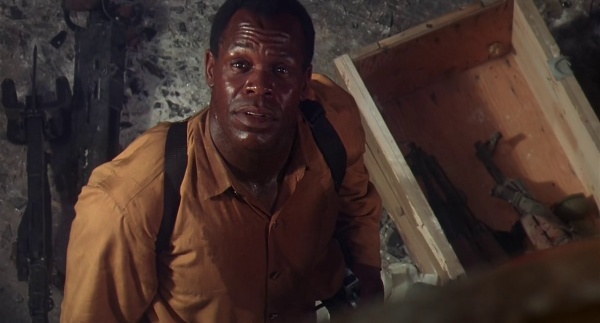 The one on the right looks to be an M2HB, which would make sense as one is listed on the page. The other one is definitely a smaller gun, the top cover style/look makes me think it is an M60 variant. Also, though it's tough to tell, that one AK looks like it has a hooded front sight, which would make it a Type 56 rather than an AKM. StanTheMan (talk) 23:52, 10 August 2015 (EDT)

Originally ID'd as a Nickel P226 (probably originally supposed that it was the same one Paxton uses later), the clearly has the shorter slide. As such the ID was changed to a P228, but looking close the grip looks a bit off and more importantly it doesn't seem to have the frame bulge, so I'm thinking this might actually be a nickel SIG-Sauer P225 rather than a P228. StanTheMan (talk) 01:58, 12 August 2015 (EDT)

The boxes shown in the armory.

This is beyond the call of duty (so to speak) and probably not worth mentioning it in the article itself. But just out of curiosity: does anyone know what the two lenghty boxes contain? Could they contain some sort of missile judging by its shape? (They are just behind the M60 on the bottom left.) Dudester32 (talk) 13:49, 14 August 2015 (EDT) 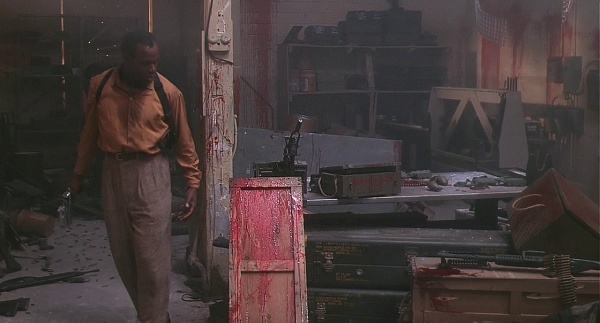 I believe that they are boxes for Redeye missile launchers. I seem to remember that these same boxes have appeared in several other films but cant think of one might now. This boxes might be what the made up missile launcher from Die Hard is transported in.--commando552 (talk) 18:57, 17 August 2015 (EDT)

Found the page I was thinking of. In Devil's Own there is a closeup of some crates supposedly containing Stingers, however the markings state that it is an M41 which is the designation for the Redeye launcher.

Navy SEALs also features a Redeye launcher in its crate, once again being described as a Stinger. I think these crates are relatively common on the surplus market so they do pop up now and again. --commando552 (talk) 19:13, 17 August 2015 (EDT)

So these guys had anti-tank missile and anti-aircraft abilities, plus all the other hardware. Harrigan wasn't kidding when he said it was a "war in the streets". Dudester32 (talk) 11:59, 18 August 2015 (EDT)

I've been going over the intro sequence featuring the G3 rifles used by both the police and the columbians. The article right now ID the rifle as the G3A3. I've just noticed that as far as I can see, none of the rifles has the "paddle" magazine release, only button release. Isn't the button release a HK 91 exclusive? Correct me if I'm wrong as I'm not too familiar with the HK 91. Dudester32 (talk) 14:44, 23 September 2016 (EDT) 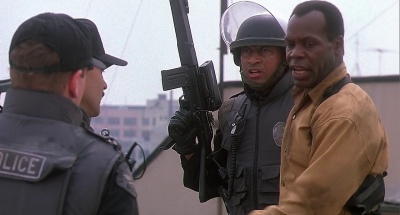 You're right, if it doesn't have the paddle release they can't be legit G3A3s. I'd say the lot are probably all HK91A2s. There are several seen firing fully automatic though, however those could just be conversions. StanTheMan (talk) 01:52, 24 September 2016 (EDT) 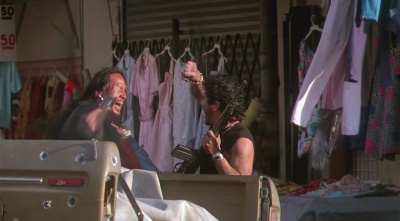 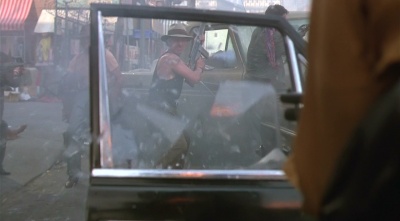 Besides that: The Columbians forward grip, plus the color, looks like this G3 variant below but still no paddle on the movie version.

Probably still HK91s, just the ones used by gang members have the OD colored stocks and 'slim' foregrips while the police have ones with black 'wide' foregrips and stocks - The furniture's interchangeable, I'm sure. The different aesthetic between the sets of rifles was likely an intentional bit of production design. StanTheMan (talk) 17:16, 24 September 2016 (EDT)