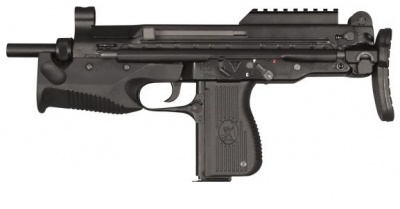 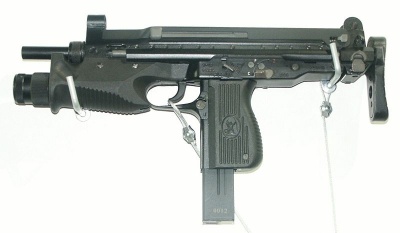 IMFDB policy says that only "movie-featured" guns should be listed in this database. This page is listed as "PM-84 Glauberyt" and contains photos of almost every PM-84 variant, however it was only the PM-84P Glauberyt that was used in movies/shows. Shouldn't we then move this page and delete irrelevant photos? (Info about other variants can be added to descr. or Specs) --Chris22lr (talk) 13:03, 11 August 2013 (EDT)

Is the difference between the PM-84 and PM-84P just that the first in chambered in 9x18mm Makarov whilst the second is in 9x19mm Parabellum? If so, how do you tell the difference between the two to know that the first hasn't been in anything? Am I correct in thinking that the original had a smaller trigger guard and didn't have complete tubes along the side for the stock and just had a guide at the front, which would make the one in Pigs 2 a Makarov chambered PM-84? Secondly, what is the first gun labelled as a PM-06? As it doesn't have the rail I would have said it is a PM-98, but the charging handle is different to the one above, do you know what it is (PM-06 with the rail removed possibly?)? The bottom two images should be moved to the discussion page, but the others are used on pages. As for the name, I don't think it should be changed to PM-84P, as PM-98s have definitely appeared in several things along with possibly a PM-84, and in the case of guns like this that have subsequent variants it is the standard to go by the original name for the page title. It wouldn't be a bad idea though to rename the page "PM-84 Glauberyt series" and then have separates section for the PM-84, PM-84P and PM-98. --commando552 (talk) 16:53, 12 August 2013 (EDT)

Well, You amazed me, I could never find the PM-84 photo on the net! And it looks just like the one in Pigs 2 (both guns lack suppressor thread, feature found on PM-84, but I don't think that all of them were prepared to use the can).
As for the "PM-06" photo which is seen on Flashpoint page: that gun is early prototype of PM-06 without rails - PM-06 was made for Polish police, and they couldn't make their minds about "rail-thing" (actual rails are 3rd type: 1st was the so-called "rhino", second were low rails along whole top-cover). Weapon used in the show is PM-98, just as described, I don't know why someone put that PM-06 prototype photo on that page (actually, that gun could be BRS-99, civilian variant of PM-98, that was exported to Canada.
So, You're right: the best option would be just change layout of this page to multiple variants (like Steyr AUG), just delete PM-06 photos, as it'd be gun without any media appearances. I can handle this, so don't bother. BTW: thanks again for that photo! --Chris22lr (talk) 15:58, 13 August 2013 (EDT)