The following weapons appear in the video game Syphon Filter:

The M16A1 can be used during the Washington assault. The weapon fires incorrectly in 3-round bursts if you tap the fire button once, but is fully capable of fully-automatic fire if it is held down. The weapon is the primary gun used by CBDC agents.

This is a bit anachronistic since the game takes place during 1999, which by then US military personnel would be armed with M16A2s at this point. Additionally since the weapon is primarily used by CBDC in a purely urban operation, a full-sized rifle is unlikely to be issued to them. A more fitting choice would be an M4A1 carbine.

A fictional weapon which is apparently some kind of one-handed AK pistol without a handguard, but is still classified as a rifle. Its description repeats the media myth of the "teflon-coated bullet:" while heavy AP rounds do have Teflon coatings to reduce barrel wear, the coating is mostly removed through contact with the weapon's rifling and has no effect on its penetration. Despite its armour-piercing performance in-game, it does not stop Gabe from recovering completely intact armour pickups.

The Izhmash PP-19 Bizon can be found in the PHARCOM warehouses. It has an incorrect 66-round magazine: the maximum possible for a real Bizon is 64. Likely due to limitations at the time, the gun is fired one-handed like a machine pistol.

The Agency is apparently unaware of the term "submachine gun."

A Heckler & Koch MP5K, referred to as the "HK5," is found in the PHARCOM expo centre. The weapon is primarily used by Phagan's guards. The weapon hold an erroneous 32 rounds in the magazine, despite the menu model having a 20-round magazine and 30 being the weapon's largest standard magazine. 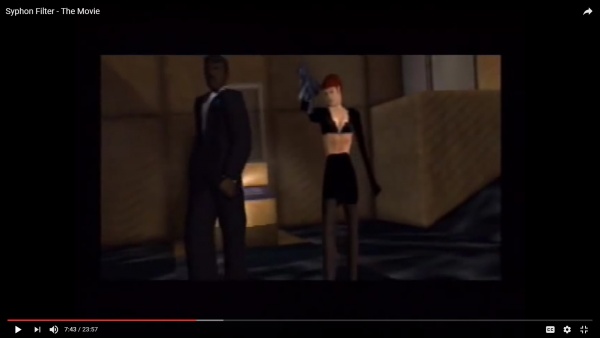 "As of this moment, we no longer work for you. We want the location of the Syphon Filter Lab." - Mara turns on Phagan following the failed Washington DC attack. 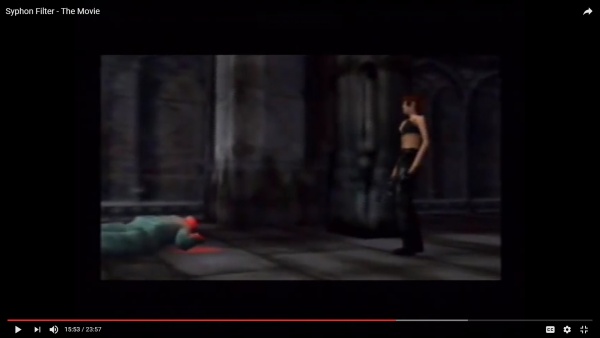 "They're all the same in the end" - Mara seemingly executes Phagan with a shot to his head. It later turns out however that he was merely brain-dead and not truly killed.

An unidetified 12 gauge choke shotgun can be used during most missions. The weapon is one of the more powerful weapons in the game, capable of easily shredding through armored enemies in a few shots. The gun has a bottomless magazine, where you do not need to actually reload the weapon with new shells and will continue to fire, so long as you have spare ammo for the gun. It also fires slugs, making it effective at range.

The weapon can also be fired while hanging, one handed. Despite this, Gabe is somehow able to magically fire the gun as normal, bypassing the need to pump the weapon per shot.

Let us not even begin to wonder how they caused collateral damage on a firing range.

The Remington Model 1100 is called the "Combat Shotgun" and found in several end-game levels, replacing the standard shotgun altogether. The weapon functions similarly to the default shotgun, but fires a bit faster and has 5 shells more in it's ammo pool.

Remington Model 1100 Tactical Shotgun - 12 gauge. This is a factory configuration for a tactical setup, featuring a high-capacity magazine tube and oversized charging handle

A sniper rifle is one of the starting weapons in every mission. While it does not look tremendously like one, the model used in the second game implies it is supposed to be a SIG SG 550 SR. The weapon also features a fairly unrealistic sophisticated scope that highlights everything from distance to target appendage, something a small scope mounted on the weapon is unlikely to have. It's world model also has no stock.

The SVD Dragunov is functionally almost exactly the same as the standard sniper rifle, but has a night vision scope.

There is, in truth, no such thing as an "SVDN2" night vision scope: this name is in actual fact applied to rifles which are modified to use the NSPUM (1PN58) night vision scope. The model is shown with a standard PSO-1 scope, and also lacks the suppressor it is claimed to have in the description.

A silenced Glock 17 is the second default weapon for each mission and is a very commonly-carried sidearm by NPCs. The suppressor cannot be removed, but regular enemies and some CBDC agents will use them without the silencer,

Description of the Glock 17. Note that the flavor text is incorrect, the Glock 17 was never the standard weapon for all branches of the US Armed Forces, that would be the Beretta M9. The Glock 17 was only readily available to special forces units. 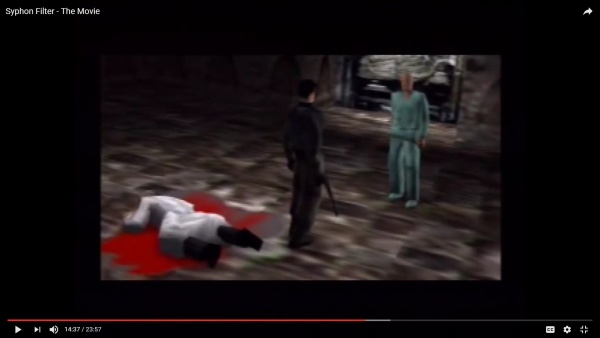 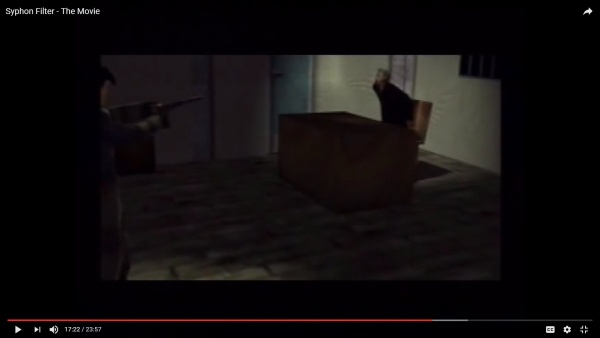 The M1911A1 can be found in Washington Park and in Rhoemer's cathedrals. The weapon is the most powerful handgun in the game. 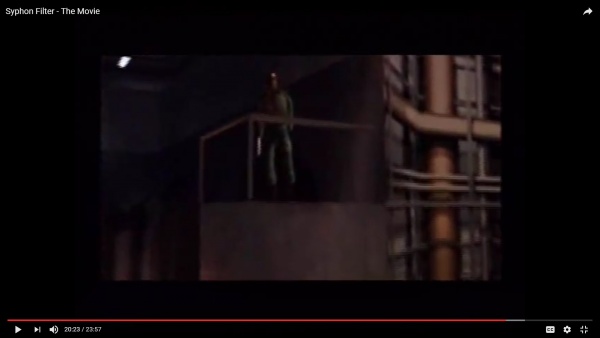 "The missile was MY idea. Markinson came here to stop it, but he was too late. As are you." Rhoemer executes Markinson.

The Glock 18 can be used in Rhoemer's cathedral and is held by Edward Benton, an Agency turncoat attempting to kill Gabe. For some reason, it is shown with the slide fully locked back.

For some reason whatsoever, the pistol's slide is ALWAYS locked back in the equipment menu.

The weapon called the "M79" in-game is actually a Tru Flite 37mm Super Long Range Gas Gun incorrectly shown as able to launch high-explosive grenades. The weapon is found uncommonly through the game, but is highly destructive, capable of instantly killing most targets in a wide area, so long as they're inside the blast radius (this however, also includes you, making it very dangerous to use in tight areas). Much like the shotgun, the weapon draws from a bottomless magazine (despite that it can only hold one round at a time), so it does not need to be reloaded and can continue to fire as there's rounds available for it.

Erich Rhoemer uses it in the last boss fight, but the player can never acquire it since the game is scripted to finish when he is killed. In circumstances when the weapon is player-controlled, it is hidden very well in certain places.

C4 charges can be equipped and planted but the player can never trigger the explosion physically. It is always automatically set off.

A grenade containing Soman nerve gas (a chemical similar to but more toxic than Sarin, also known as GD) can be found in stealth missions. It appears to essentially be a truncated M7 CS gas grenade. It is integral to taking enemies down without sounding the alarm. The weapon is also required to kill Rhoemer, who's armor makes him invulnerable to bullets and grenades.

The standard grenade which can be found in most missions: it explodes 3 seconds after throwing it. The weapon is quite powerful, killing any non-boss target if they're even remotely near the blast zone (including you). Likely due to engine limitations, the damage passes through walls without any penalties.

The game appears incredibly confused about what the grenade is: ammonium perchlorate is an oxidiser normally used in rocket fuel, and the only type of grenades that use it are flashbangs, where it is used to generate a rapid reaction from aluminium or magnesium. The use of this particular chemical is probably a result of someone on the dev team recalling the PEPCON explosion in 1988.

In perhaps one of the most memorable scenes of gaming, Anton Girdeaux brandishes a fire whip during the fight against Gabe in the Freedom Memorial building in Washington Park. Since he is unable to use explosives against the heavily armoured pyromaniac (to avoid setting off the viral bomb inside the memorial), Gabe instead decides to give the Frenchman a taste of his own medicine by shooting the fuel tanks mounted behind him.

Of note, Syphon Filter is quite possibly one of the earliest games to depict how a real military flamethrower operates. Instead of just breathing fire like an oversized blowtorch like in most games: Girdeaux's flamethrower douses an area with streams of burning, liquid fuel that continues to burn an area for a period of time. 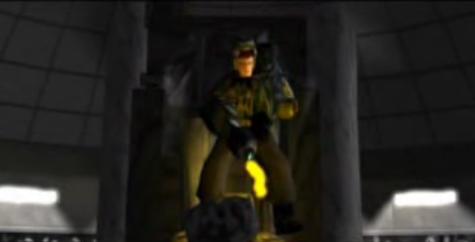 "Gabriel Logan, always the optimist! Look all around you, Logan! This hall contains the mosaic, depicting the entire history of your country's wars and aggression~ We, are about to make an addition to it!" - Girdeaux's pre-fight monologue, shortly before being roasted alive by his own weapon.

A general-purpose, nondescript taser which appears to have been based on the design of the Star Trek: The Next Generation hand phaser is a starting weapon in every mission. The signature weapon of the series, it was possible to set enemies alight if sustained stunning was used. This convention carried over to most games in the franchise, but it was not possible to cause targets to be set aflame in certain circumstances. In the PS2 and Vita versions of Syphon Filter: Dark Mirror, you can't burn enemies with the Taser but in the PSP version, you can. In Syphon Filter: Logan's Shadow, you can't burn enemies with it.