The Starr revolver was first introduced in 1858 as a sidearm for the U.S. Army, being called the "Starr 1858 Army". This revolver was a six shot, blackpowder percussion revolver with a unique featture; a double action or "self-cocking" trigger mechanism. Unfortunately the mechanism was weak and the gun lost favor with soldiers after having their tirggers break in combat all too often. To fix this, the gun was given a more simple single action system and reproduced in 1863 as the "Starr 1863 Army" revolver. By this time, more simple revolvers like the Colt 1860 Army and Remington 1858 New Army had found more favor with the soldiers and the Starr become obsolete. Its worst featture (which was likely its downfall) was its method of reloading. To open the gun, the screw seen behind the hammer had to be unscrewed, which took time to accomplish. Once the gun was loaded, the screw had to be re-inserted and screwed in to close. If the screw was lost, the gun became useless. 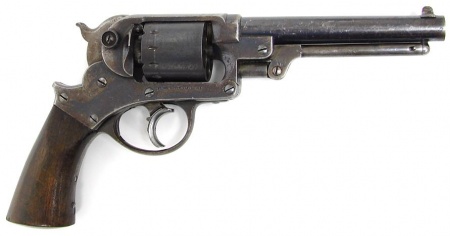