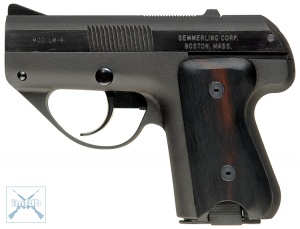 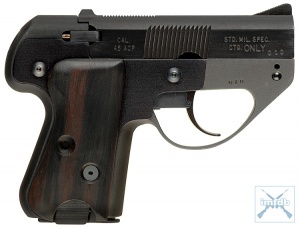 The Semmerling LM-4 is a magazine-fed, manually-operated striker-fired double action pistol first manufactured in the late 1970s and offered to the US Army, government agencies and law enforcement as a small lightweight concealable platform that could fire the large .45 ACP round. It was designed to be handled by an experienced user in the dark, and it has no safety, decocker, or slide release: overall the weapon has just 33 parts, including screws, springs and grip panels. The rather unique action fires from a static, fully-locked breech and ejects when the slide is pushed forward rather than pulled back: this can easily be accomplished with the thumb of the shooter's off-hand, and it is even possible to operate the gun one-handed using the trigger finger.

The LM-4 was the culmination of a series of attempts by the designer, Philip Lichtman (LM standing for his surname), to build an ultra-compact, effective pistol: the LM-1 to LM-3 were essentially dry runs, initially inspired by the Pieper Bayard 1908 pocket pistol. The LM-1 and LM-2 were chambered for .380 ACP, while the LM-3 was a 9mm: all three were semi-automatics. The shift to .45 ACP appears to have been the result of a desire to make the LM-4 less of a "mouse gun" than prior iterations.

Lichtman held several patents outside of firearms for precision surgical tools, and the construction of the pistol rather reflects this: each LM-4 was handmade from SAE S-7 hi-shock tool steel (an alloy normally used to make drill bits and power hammer dies), magnafluxed during production, and sent to two different X-ray labs to test the soundness of the metal.

Rather like the British Welrod Pistol, it is unclear who used the LM-4 or when due to the covert nature of the weapon. It is known that some of the examples on display at the NRA National Firearm Museum are a variant with a threaded barrel: their collection also includes the Semmerling XLM, an experimental blow-forward semi-automatic variant of the LM-4 and one of the smallest semi-automatic .45 ACP pistols ever produced.

The Semmerling LM-4 Compact Pistol was used in the following: