Racketeer (original Russian and Kazakh title is Рэкетир Reketir) is a cult 2007 Kazakhstan crime triller. The story tells about life kazakh man named Sayan, who was born in intelligent family, but became the cruel and ruthless criminal authority.

The following weapons were used in the film Racketeer (Reketir):

Several criminals, including Sayan (Sayat Isembayev), Ruslan (Murat Bisembin) and Aman (Saken Aminov) use Makarov PMs several times. It's most likely a IZh-79-9T Makarych a blank firing replica of Makarov PM, due to it being the most popular legal non-lethal gun, legally available for civilians in Kazakhstan. Only a single pistol is seen at a time so it's highly probable that a single movie prop was used.

Aman (Saken Aminov) aims his pistol during the robbery.

Note the safety is on.

Sayan (Sayat Isembayev) racks the slide on his pistol.

The silenced PM on the evidence photos. 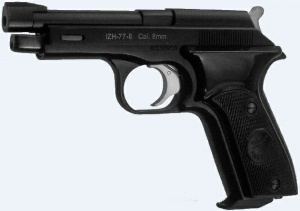 Close Up. Note the lack of rear sights, distinguishing this a a blank-fire gun.

A couple of pounds more pressure, no more head.

Sawn-off Double Barreled Shotgun can be briefly seen in the hands of Aman (Saken Aminov).

Aman (Saken Aminov) with the shotgun.

Good view of the barrels in the Sayan's (Sayat Isembayev) hands.

Beer stand owner (Murat Nurasilov) briefly uses a Pump Action Shotgun, before Sayan (Sayat Isembayev) takes it for himself. General shape are similar to Mossberg 500 Cruiser, but it's only a guess.

Beer stand owner (Murat Nurasilov) tries to use his gun...

...but Sayan (Sayat Isembayev) takes the gun for himself.

Sayan (Sayat Isembayev) carry AK-74 during the military servise. Later, he holds it during the gangs meeting.

Sayan (Sayat Isembayev) with the rifle.

SOBR can be seen armed with the AKS-74U rifles