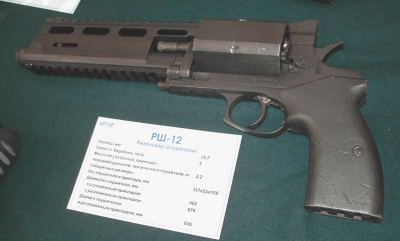 The RSh-12 (Russian: РШ-12; Револьвер Штурмовой калибра 12,7, "12.7mm Assault Revolver") is a somewhat mysterious Russian large-caliber revolver. It was stated that it was developed in the early 2000s. To public knowledge, its first and only appearance ever was a showcase in a 2014 convention, shown by the KBP Instrument Design Bureau. The model shown is an apparently stress-tested prototype (as indicated by numerous dents across the gun), marked with serial number 100001. This model is the only publicly-known model of the weapon. Only one image was taken of the weapon, accompanied with its information card (from which most technical info on the gun is taken from). In 2016, it was mentioned about its adoption by some special subdivisions of Russia, but so far there is no evidence of its actual use, as well as production.

The RSh-12 is often described as an anti-materiel revolver, and its was speculated to have been made for destroying locks and other objects. It is chambered in 12.7x55mm, which is also used on the VSSK Vykhlop sniper rifle and the ShAK-12 battle rifle (previously known as the ASh-12.7). While not a .50 BMG, on a handgun scale, such an overkill round would be either for big game hunting or anti-materiel use; its tactical features suggest the latter. Not content with being just a .50 revolver, the RSh-12 shows even more bizarre features. It fires from the bottom cylinder instead of the top, in a manner similar to the Mateba Autorevolver. Its pentagonal cylinder is seemingly both spin-out and top-breaking, since it has both hinges for both these purposes. Its information card also infers it has a suite of attachments, as its dimensions are described both in stock form and when attached with a buttstock, a foregrip, and surprisingly even a suppressor. However, the details of the gas containment system, if any, to accompany the suppressor are unknown; one can imagine it draws parallels to the Nagant M1895.

The RSh-12 and variants can be seen in the following films, television series, video games, and anime used by the following actors: