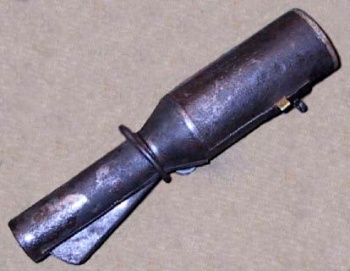 In 1925, the decision was made to create a new stick hand grenade. The first trials of what later became RGD-33 were unsuccessful, and modified RG-14 was adopted as stopgap weapon. The modified version, designated RG-14/33, had increased capacity and reliability. It was filled with TNT instead of Picric Acid; to improve its kill radius a fragmentation sleeve could be fitted (the sleeve was optional, placed on grenade only in need during the combat). Otherwise, RG-14/30 is exactly the same as the base model. RG-14/33 was produced in 1930-1934 and then replaced in production by RGD-33, but large stores of these grenades, both newly produced and converted from original RG-14s, allowed its usage in Red Army until mid-1943.

Note: as both versions externally look the same, there isn't a guaranteed way to distinguish them from each other. In most cases screen grenades are RG-14/30.