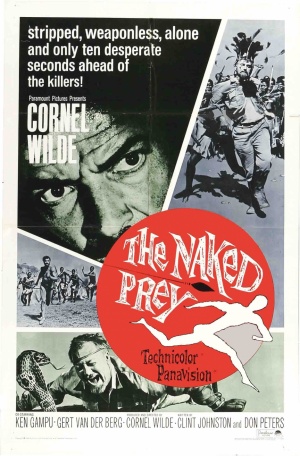 While on an elephant-hunting expedition in Africa, a group of white men offends a local tribe's chief. All but one (Cornel Wilde) are captured and murdered by the natives. The lone survivor is stripped of his clothing and forced to fight for his survival against the tribe's fiercest warriors.

The following weapons were used in the film The Naked Prey:

The Man (Cornel Wilde) uses what appears to be a Martini-Henry Rifle when the expedition goes elephant-hunting. Soldiers defending the fort where the Man seeks refuge also have Martini-Henrys.

The Martini-Henry lying on the ground after the expedition is attacked.

Soldiers at the fort fire at the attacking tribesmen with their Martini-Henry rifles.

The 2nd Man (Gert van den Bergh) uses what appears to be a sporterized Enfield while hunting.

The 2nd Man takes aim with his Enfield.

The 2nd Man fires at an elephant.

While fleeing the tribe's warriors, the Man encounters a group of slavers, some of whom are armed with Jezail muskets.

A slaver with his Jezail during an attack against a village.

The Man uses a slaver's own Jezail to choke him as they fight.

A slaver shoots at the Man with his Jezail.

Another slaver shoots at the Man with his Jezail.
Retrieved from "http://www.imfdb.org/index.php?title=Naked_Prey,_The&oldid=714831"
Categories: