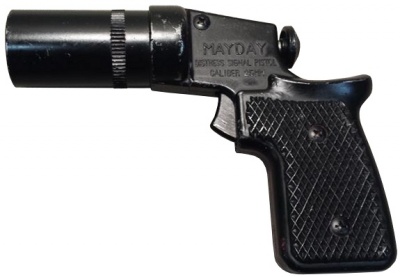 The Mayday Distress Signal Pistol is a 25mm flare pistol intended for emergency marine and aviation use. In order to load and fire the pistol the barrel is unscrewed from the frame, a flare is inserted in the rear of the barrel, the pistol is reassembled, the striker on the rear of the pistol is manually cocked, and the safety (consisting of a wire loop that swings backwards from the top of the frame to block the forward movement of the striker) must be disengaged. Although originally of Japanese origin, this flare pistol was imported into the USA by F.I.E. in some numbers.

The Mayday Distress Signal Pistol and variants can be seen in the following films, television series, video games, and anime used by the following actors: