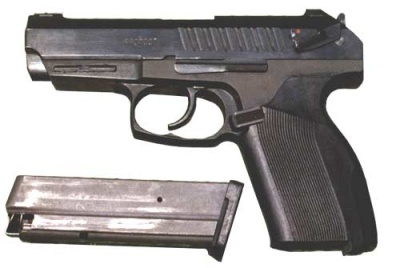 MP-444 Bagira (MP - Mechanical Plant, "Bagira" - Bagheera, the black panther in Rudyard Kipling's The Jungle Book) is an experimental Russian pistol, designed on Izhmekh in early 1990s as a planned replacement for Makarov PM. MP-444 was one of the first Russian designs with plastic body. The pistol was tested in 1995. It wasn't issued to any military or law enforcement agencies but found some usage in Kazakhstan as sporting and training weapon.