Last of Us Part II, The

The Last of Us Part II is an action-adventure survival horror game developed by Naughty Dog and sequel to 2013's The Last of Us.

Five years after the events of the first game, Ellie (portrayed by Ashley Johnson) and Joel are enjoying a peaceful life among a community of survivors in Jackson, Wyoming. However, this peace is shattered by an act of brutal violence that spurs Ellie to journey to the ruins of Seattle, Washington in order to seek justice and vengeance.

The sequel features many of the gameplay concepts from the first game, such as scarce and precious ammo, using stealth to outmaneuver enemies, and crafting improvised weapons using scavenged materials.

The following weapons can be seen in the video game The Last of Us Part II:

A Beretta 92FS Inox with wooden grips serves as Ellie's primary handgun, known simply as "Semi-Auto Pistol". A new feature allows for Ellie to craft an improvised suppressor out of a water bottle. This ad-hoc suppressor will, rather understandably, only function for a limited number of shots before breaking. It starts with a paltry 6 round magazine capacity, which can be upgraded to hold 10 rounds. However, this is still short of the 92FS' standard 15 round magazine capacity. A standard black Beretta is frequently used by survivors. 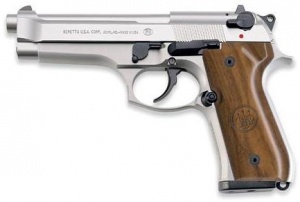 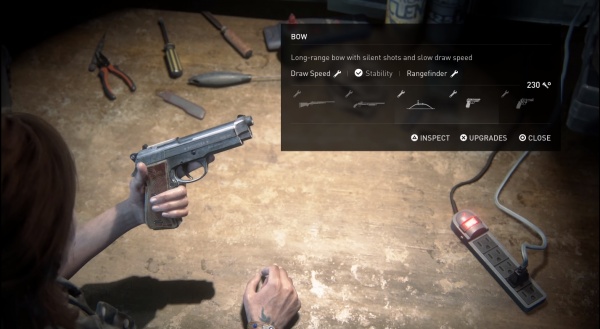 The 92FS being examined by Ellie at a workbench. Note the wooden grips and the trademark of the fictional manufacturer "Nicotera" on the slide.

When fitted with the Stability upgrade, the wooden grips are replaced by a pair of standard black grips. 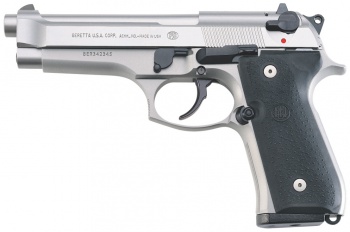 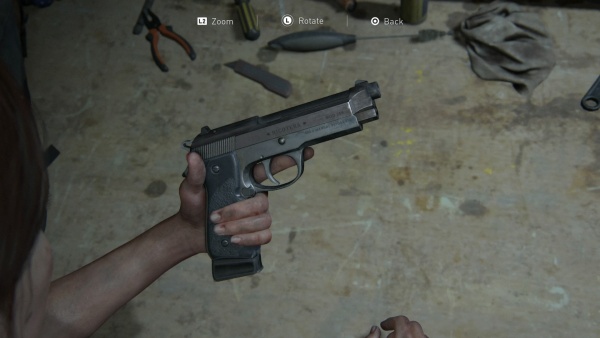 Ellie trades the wooden grip for something more modern. In this image, the Beretta has also been fitted with the Extended Magazine upgrade. While the magazine looks to be a 20-rounder, it only allows for a capacity half that.

A pistol heavily, but not exactly matching, the Browning Hi-Power is used by Dina. 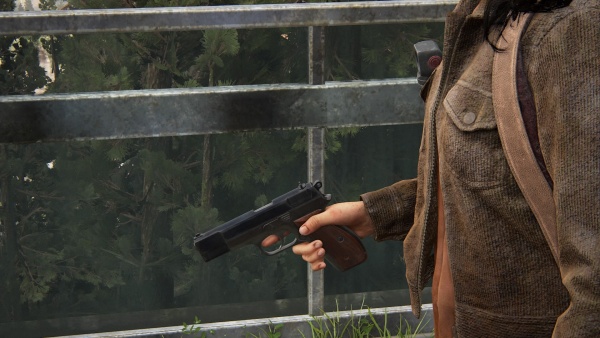 Dina's pistol. The Hi-Power resemblance is most evident in the slide and ring hammer.

The Taurus Model 66 revolver returns from the first game, again under the simple moniker of "Revolver". It starts with a short barrel that appears to be around 2.5", but can be fitted with a longer barrel that increases damage. The Model 66 is also used by Joel and some hostile survivors. 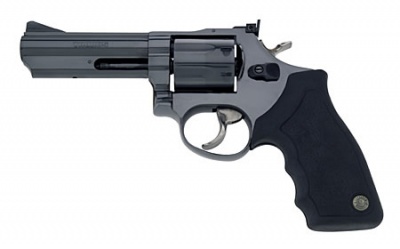 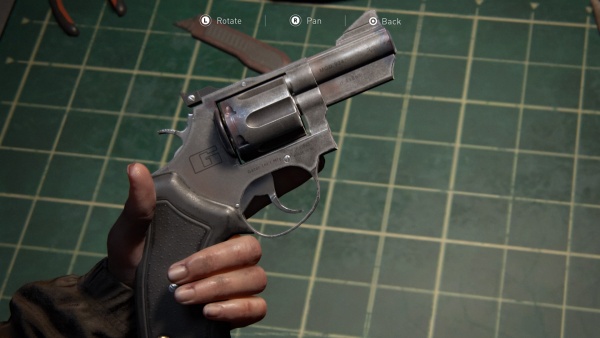 The stock Model 66 at the workbench. It was apparently made by "Gator International Manufacturing" and is a "Model 924".

The Thompson Center Arms Contender appears as the "Hunting Pistol".

What looks like a SIG-Sauer MPX appears as "Silenced Submachine Gun".

A Remington 870 with a sawed-off stock and barrel acts as Ellie's primary shotgun. A full-sized Remington 870 is used by Joel. The sawed-off variety is encountered in the hands of hostile survivors. 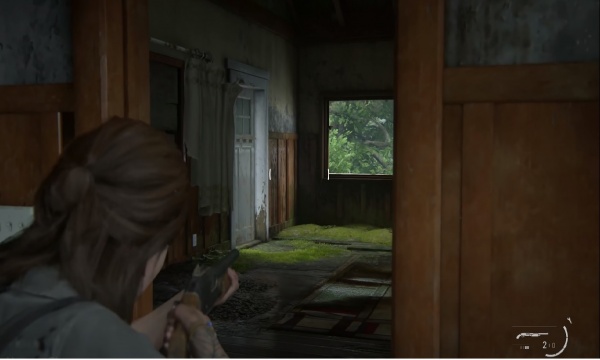 Ellie clears a house with her Remington 870 during a gameplay demo. 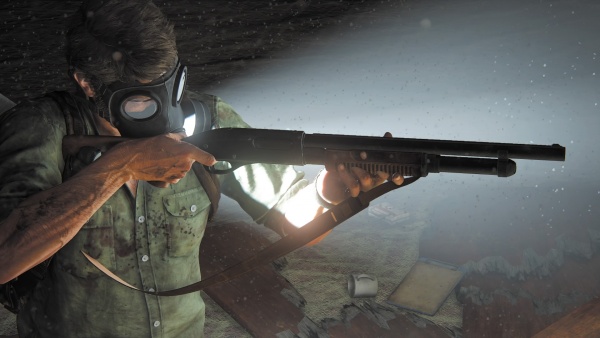 Joel aims his shotgun at infected.

The suppressed IMI Galil SAR returns from the first game's Factions multiplayer mode. It is once again called the "Specter" and is modeled with a 30-round magazine, but holds only 20 rounds.

The Remington 700 appears as the "Bolt-Action Rifle". As with the Winchester Model 70 in The Last of Us, it starts out with iron sights, but can be fitted with a sniper scope. Unlike in the first game, the weapon's action is now correctly cycled after each shot. It starts with a 3 round capacity, but can be upgraded to use a detachable magazine that holds 6 rounds and speeds up the reload time. 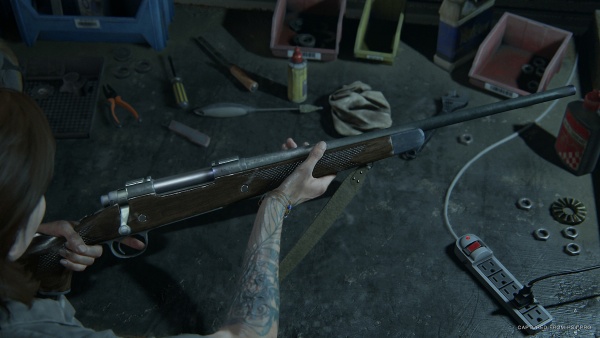 Ellie with the Remington 700 at a workbench. 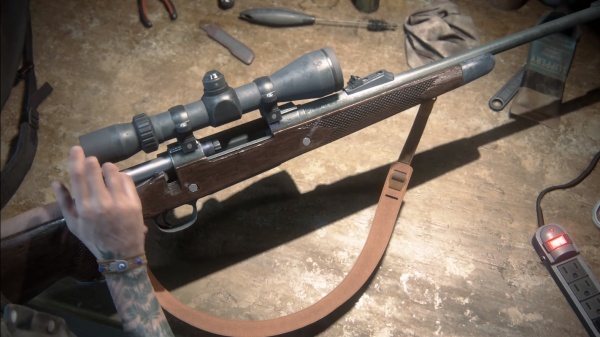 The rifle fitted with a scope as Ellie closes the action. 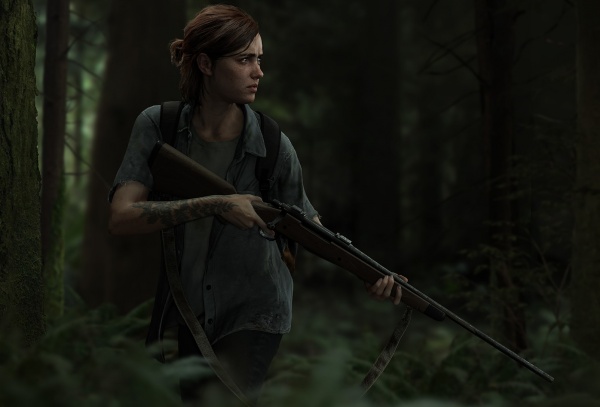 An official artwork of Ellie with the Remington 700.

A rifle that heavily resembles the Ruger Mini-14 with green synthetic furniture is frequently used by members of the Washington Liberation Front, a hostile militia that occupies Seattle. Despite their semi-automatic, detachable magazine-fed nature being an upgrade over her bolt-action Remington, Ellie cannot use these rifles though she can obtain the ammo from them for her Remington 700. 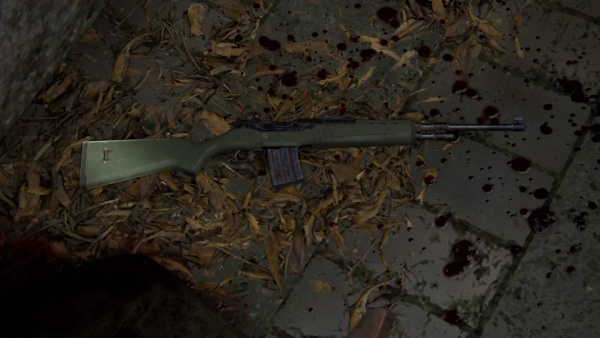 The Mini-14ish rifle next to its deceased former user. The main differences in design are the sights, lack of heat shield, different barrel design, and the placement of a charging handle under the right side of the action. It also appears to be using 20 round magazines. Also note that this rifle appears to have 3 different iron sights- a rear sight, front sight, and what appears to be an adjustable AK-style rear sight between them.

A survival magazine Ellie finds that unlocks additional skills features the "GX3-9" assault rifle from Uncharted 4 on the cover. This hybrid rifle appears to be a mixture of the SG 552 and G36C rifles. 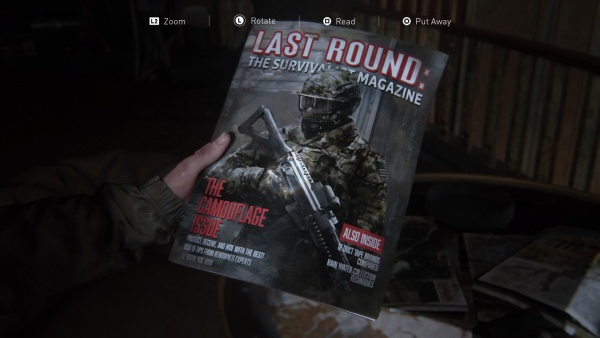 The camouflage lesson being taught here is disguising which European assault rifle is on the cover of this magazine.

Tommy uses a scoped rifle based on the Mini-14 above, but with wooden furniture and a flash hider that gives it a strong resemblance to the Springfield Armory M1A. It is used by Ellie in a flashback to snipe infected. 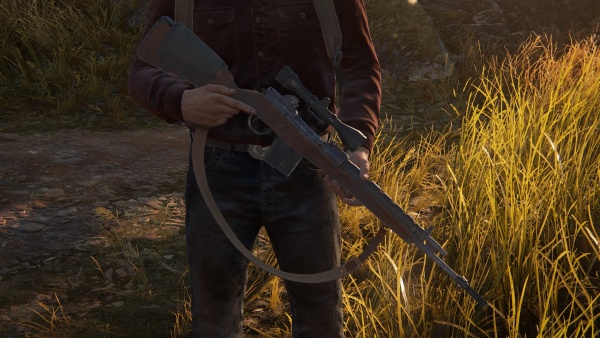 Tommy with his rifle. Notably, the gas cylinder and barrel have swapped places. 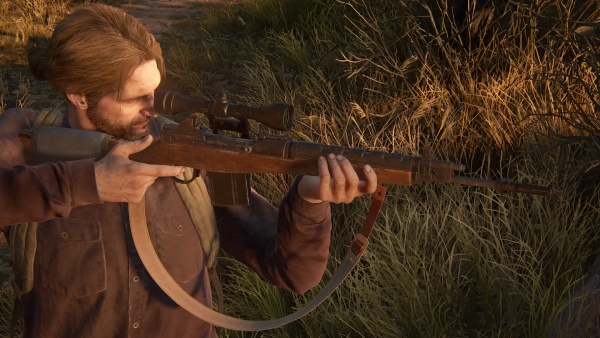 Tommy sights up some distant infected. This rifle retains many of the odd design cues of the Mini-14 based rifle, including the 3 iron sights. The action and placement of the charging handle give it some resemblance to the SVT-40.

Ellie can use a bow and arrow for silent takedowns of hostile survivors and infected. The bow in Part II can also use alternative arrow types, such as explosive arrows. 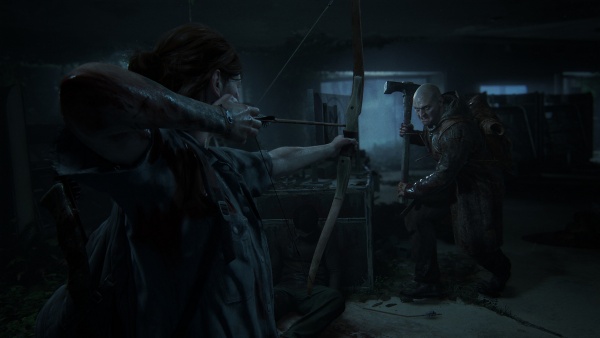 Ellie prepares to let loose on a hammer-wielding cultist in a pre-release screenshot. 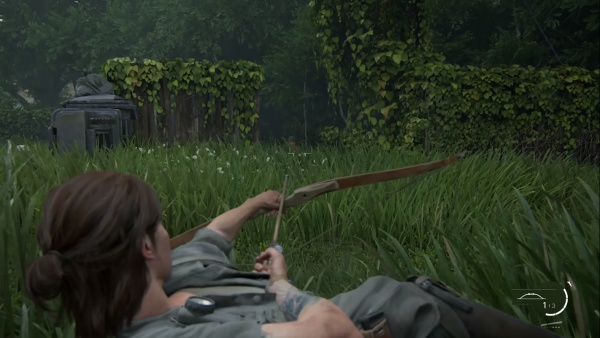 A prone Ellie lines up a shot on a hostile survivor.

Rather oversized M18A1 Claymores are rigged up as explosive trip mines throughout Seattle by the WLF. They are detonated when an attached tripwire is broken. Ellie can either avoid them, or detonate them by shooting the mine or simply throwing a brick or bottle at it. 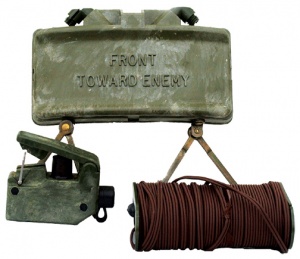 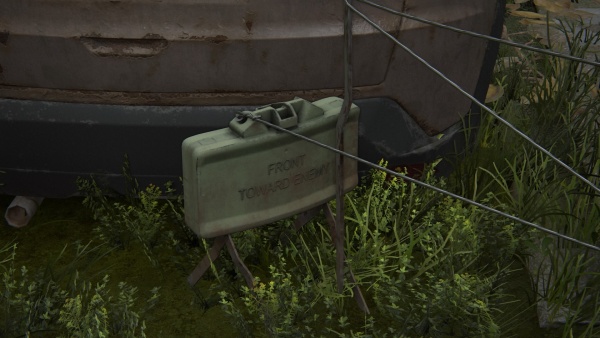 A Claymore lurking near an abandoned car.
Retrieved from "http://www.imfdb.org/index.php?title=Last_of_Us_Part_II,_The&oldid=1355723"
Categories: