Jason Bourne is the fifth installment in the Bourne film franchise and marks the return of Matt Damon and director Paul Greengrass to the series. The film follows Bourne as he comes out of hiding after a decade when a correlation between the CIA and a social media corporation threatens to be exposed. The cast for the 2016 film includes Tommy Lee Jones, Vincent Cassel, Alicia Vikander, and returning cast member Julia Stiles. The world of Bourne would also be examined in 2019 with the USA Network original series Treadstone.

The following weapons were used in the film Jason Bourne:

Jason Bourne (Matt Damon) is seen using a SIG-Sauer P226R throughout the film. The SIG also appears to be the pistol carried by officers of the CIA, including Heather Lee (Alicia Vikander) and Craig Jeffers (Ato Essandoh).

The SIG-Sauer P226 is chambered.

The SIG-Sauer P226R is held by Bourne to the head of former CIA analyst Malcolm Smith (Bill Camp).

The SIG-Sauer P226R is held by Heather Lee (Alicia Vikander).

Jason Bourne (Matt Damon) uses a SIG-Sauer P225 in his flashback to the Neski double-murder (his first assignment).

The SIG-Sauer P225 is seen in Bourne's flashback to his first assignment as seen in The Bourne Supremacy.

Director Robert Dewey (Tommy Lee Jones) is armed with what appears to be a SIG-Sauer P228 during a confrontation in Las Vegas. A suppressed pistol also is used by the Asset (Vincent Cassel).

The pistol is seen on the table as Bourne confronts Director Robert Dewey (Tommy Lee Jones).

The pistol is pointed by Dewey (Tommy Lee Jones).

The suppressed weapon is wielded by the Asset (Vincent Cassel).

In a flashback to a scene in The Bourne Ultimatum, Jason Bourne (Matt Damon) uses a Glock 17 while joining the Treadstone program. Glock pistols also appear to be carried by Greek law enforcement. 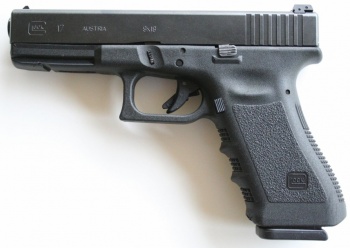 In a flashback to a scene in The Bourne Ultimatum, Bourne fires his Glock.

In a flashback to a scene in The Bourne Ultimatum, Bourne puts his Glock to Dr. Hirsch (Albert Finney).

During the flashback from The Bourne Identity (2002) to his mission to kill Wombosi (Adewale Akinnuoye-Agbaje), Jason Bourne (Matt Damon) is seen holding a Glock 19 fitted with a laser sight.

During the flashback from The Bourne Identity to his mission to kill Wombosi, Bourne holds the Glock.

Heckler & Koch USP pistols are carried by CIA operatives who confront Bourne during a Greek protest. Bourne disarms an operative and aims the pistol.

Bourne holds the pistol in an alternate angle. Here the pistol appears to be a resin prop gun (note the seam going down the slide).

The weapon is wielded by Nicky Parsons (Julia Stiles).

The suppressed weapon is wielded by the Asset (Vincent Cassel).

A suppressed SCAR-L CQC is seen used by The Asset (Vincent Cassel) as a sniper rifle.

The suppressed SCAR-L CQC about to be used by the Asset (Vincent Cassel).

The weapon is wielded.

The weapon is taken out by the Asset.

M16A2 rifles are carried by USAF airmen guarding the arrival of a private jet in Las Vegas.

M16A2 rifles are carried by USAF airmen guarding the arrival of a private jet in Las Vegas, Nevada.

M4A1 carbines appear to be carried by members of Las Vegas SWAT. A carbine also is briefly carried by the Asset in Las Vegas.

The Asset armed with the weapon.

In a flashback to The Bourne Supremacy, Jason Bourne (Matt Damon) uses a bolt-action, bullpup sniper rifle custom-built prop that resembles a resemble the Keppler & Fritz KS II in general appearance. This was built especially for the movie by a gunsmith. 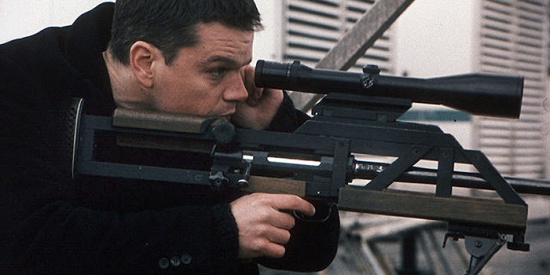 In a flashback to The Bourne Supremacy, Bourne takes aim at the CIA station.

The suppressed SIG is used by the Asset.

In a deleted scene, Bourne takes a Remington 870 from a police cruiser.

In a deleted scene, Bourne uses the shotgun during the chase in Las Vegas.

During the Greek protest, Bourne uses a launcher that resembles the Brügger & Thomet GL-06.

Bourne takes out the launcher.

Bourne prepares to use the launcher.

Bourne raises the launcher. An alternate angle was used in the actual film.