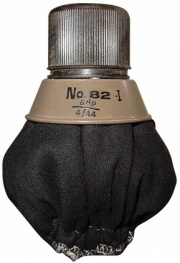 The No. 82 Grenade, more commonly known as the Gammon Grenade or Gammon Bomb, is a British hand grenade designed to replace the No. 74 ST Grenade, which was at times more dangerous to the user than to their targets. One feature that differentiated this grenade from others of its era was the ability for the user to add or subtract the amount of explosive material within the device, which was contained in an elastic canvas bag. It was typically issued to specialized infantry units like paratroopers and special forces.