Fantastic Beasts and Where to Find Them

The film takes its name from the fictional textbook Fantastic Beasts and Where to Find Them from the Harry Potter universe, the author of which, Newton "Newt" Scamander, is the film's protagonist.

The following weapons were used in the film Fantastic Beasts and Where to Find Them:

Security guards at the bank, and some NYPD officers are armed with the Colt Official Police Revolver. 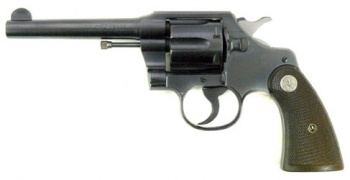 The officer in the center along with the one on the left hold their revolvers.

Some officers are armed with M1921A Thompson.

The Thompson is seen in the hands of the officer on the near left.

Police officers are armed with the Winchester Model 1897 "Trench Gun" .

NYPD officers raise up their shotguns.

The officer on the right wields the shotgun.
Retrieved from "http://www.imfdb.org/index.php?title=Fantastic_Beasts_and_Where_to_Find_Them&oldid=1437712"
Categories: