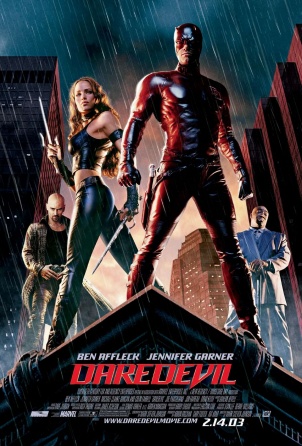 Daredevil is the 2003 feature film adaptation of the Marvel Comics series and was directed by Mark Steven Johnson (Ghost Rider). Ben Affleck stars as Matt Murdock, a man blinded from an accident in his youth that also caused a heightening of his remaining senses. While working as an attorney in the day, he uses his newfound powers at night to punish crime throughout the city as the superhero known as Daredevil. The cast included Jon Favreau, Colin Farrell and Jennifer Garner as Elektra Natchios, a character who was spun off into her own feature film: 2005's Elektra. In 2015, the comic book character would be adapted again in a Netflix Original series that is part of the Marvel Cinematic Universe.

The following weapons were used in the film Daredevil (2003):

2nd generation Glock 19 pistols are used by several thugs in the bar, the Natchios body guards, and NYPD officers in the film. Elektra Natchios (Jennifer Garner) picks up one of these Glocks from a bodyguard and uses it to shoot at Daredevil (Ben Affleck), thinking he killed her father.

A thug during the bar shootout armed with a Glock 19. It's possible that this is a Non Gun.

A thug fires his Glock 19 at Daredevil.

When one of the bodyguards falls dead, his Glock 19 falls out in front of him.

Closeup of the Glock 19.

Jennifer Garner does a great job of not flinching.

Instead of locking open, the Glock simply "clicks" empty, and the sound editor made the trigger sound double action since she repeatedly pulls the trigger and the same click is heard.

NYPD officers storm the building with their Glocks and flashlights at the ready.

A Beretta 92FS Inox is used by a thug during the bar shootout.

The thug to the left fires his Beretta Inox.

The thug gets shot because apparently ceiling fans can throw bullets back at you.

In a scene from the Director's Cut, Wesley Owen Welch (Leland Orser) uses what appears to be a SIG-Sauer P228 pistol to murder a hooker.

In a scene from the Director's Cut, a closeup on the muzzle of W.O.W.'s SIG-Sauer P228.

Jose Quesada (Paul Ben-Victor) uses a Charter Arms Undercover during the shootout in the bar. A thug in the bar also uses the revolver. 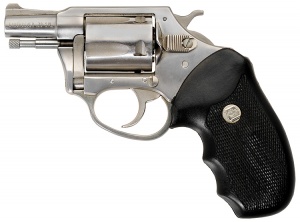 A thug in the bar fires a Charter Arms Undercover at Daredevil while flinching terribly. The character here is Tanoai Reed, a stuntman and cousin of Dwayne "The Rock" Johnson.

Quesada falls into a puddle while running from Daredevil. Here the Undercover appears to be a flashpaper 'Non Gun', as seen in Dawn of the Dead.

While holding the revolver, Quesada waits to ambush Daredevil.

Quesada draws his Smith & Wesson Model 60 from his ankle holster.

When Quesada cocks the hammer, an extreme closeup seen of the head of a .38spl Hollowpoint.

His Model 60 is thrown out of reach when Daredevil knocks Quesada on the train tracks.

A Smith & Wesson Model 66 is very briefly seen in the hands of a thug in the bar.

Daredevil knocks out a thug armed with a Smith & Wesson Model 66.

One of the thugs during the bar shootout uses a Heckler & Koch MP5K, which is a rather luxurious weapon for such a low life thug to own. What's puzzling is how a very loud gun doesn't effect Daredevil's super-sensitive hearing yet bells and trains do.

A thug fires his Heckler & Koch MP5K at Daredevil.

Closeup of the MP5K firing.

Thug fires his MP5K at Daredevil on the ceiling fans.

Heckler & Koch MP5A3s are used by the NYPD ESU teams storming the building near the end of the film.

A Remington 870 is taken from underneath the bar during the opening shootout. Two NYPD officers are also seen guarding Bullseye (Colin Farrell) at the hospital armed with these.

A thug receives a Remington 870 from under the tender's counter.

A Mossberg 500 is used by a thug during the bar shootout.

A thug fires his Mossberg 500 at Daredevil.

NYPD ESU teams are using an Unknown AR-15 rifles, with M16A1 receivers and stocks but with ultra short 10.5" barrels and carbine forends. These may be airsoft props.

The ESU officer to the left armed with an unknown AR.

An ESU officer outside the church with one of these ARs.

An ESU sniper keeps his sights on Daredevil (Ben Affleck) and Bullseye (Colin Farrell) in the church armed with a Remington 700P LTR (Light Tactical Rifle).

An ESU sniper with a Remington 700P. Based on the way he holds the gun, this guy could actually be trained on how to use it.

The fluted barrel is visible on the rifle when the sniper fires and puts a round through Bullseye's hands.
Retrieved from "http://www.imfdb.org/index.php?title=Daredevil_(2003)&oldid=1406778"
Categories: