The following weapons were used in the film Crocodile Dundee II:

Rico's (Hechter Ubarry) weapon of choice is a Browning Hi-Power chambered for the 9mm Parabellum cartridge (Crocodile Dundee II was released in 1988 and the .40 S&W variant of the Browning HP did not hit the market until 1990). 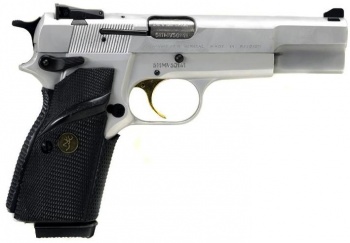 Rico holds his Browning Hi-Power as he calls out to Dundee.

The Colt Commander isused by Rico's henchmen at his mansion.

A henchman about to get jumped by Dundee with his silencer-equipped Colt Commander.

Rico's henchmen with their silencer-equipped guns.

Miguel (Juan Fernández) has carries a Smith & Wesson Model 66 revolver. It's seen fleetingly when he forces Sue into Rico's limo, and stuck in the waistband of his pants in other scenes. 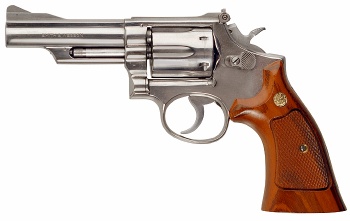 The other DEA agent (Stephen Root) holds his snubnose as he enters the apartment.

Brannigan with his revolver as he watches Dundee's escape.

Miguel (Juan Fernández) receives a Colt Trooper from Frank when he arrives in Australia. 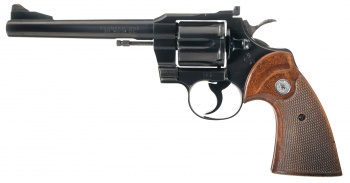 Frank presents the gun to Miguel.

Miguel holds the gun on Walter.

Miguel's (Juan Fernández) rifle in Australia is a Ruger Mini-14.

Miguel fires up at Dundee.

Miguel's rifle rests against a rock behind Rico.

Denning fires up at Dundee on the ridge.

Jose (Luis Guzmán) used a sporterized Pattern M1914 Enfield until he gets captured. Being in Australia, we can assume it is a Pattern 14 rather than the U.S. M1917 Enfield.mb

Jose with the Enfield.

One of Rico's men in Colombia uses an MP40 submachine gun.

Held by the henchman on the right.

The hitman takes aim with the Ithaca.

Dundee (Paul Hogan) with the Ithaca after disarming the hitman.

Frank's shotgun behind the windscreen SUV.