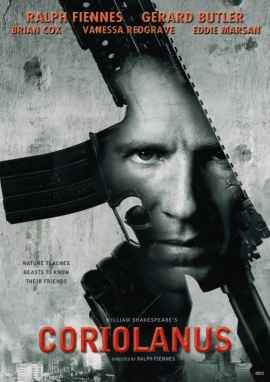 Coriolanus is a modern retelling of the Shakespearian tragedy. The original work by William Shakespeare was based on real life Roman leader Gaius Marcius Coriolanus. This is a modern film rendition of an original Shakespeare play, much like Richard III, and was filmed in Serbia utilizing modern settings and weaponry.

The following weapons can be seen in the film Coriolanus:

The SIG-Sauer P226 appears to be the standard sidearm of both Roman and Volscian forces in the movie. Tullus Aufidius (Gerard Butler), leader of the Volscians, uses a P226 to execute a Roman prisoner. Coriolanus (Ralph Fiennes) later uses a P226 while single-handedly storming a building during the battle in Corioles.

Aufidis shoots the prisoner with a P226.

Coriolanus fires the P226 as he is attacked by a Volscian.

A bearded Coriolanus holds a P226 when he enters a Volscian base.

The Colt Model 933 carbine appears to be the standard infantry weapon for the Roman "Legionnaire" forces, used by Caius Martius Coriolanus (Ralph Fiennes) and his fellow troops. All of the M933s in the movie are fitted with M68 Aimpoint red dot scopes, and some of the rifles are also missing their front sights.

A Legionnaire aims a Colt Model 933.

A Legionnaire holds a Model 933 with a missing front sight.

Coriolanus leads his men down a street in Corioles with his M933 at the ready.

Legionnaires advance with their Colt Model 933s at the ready

Tullus Aufidius (Gerard Butler) and his fellow Volscian soldiers are mainly armed with Zastava M70AB2s throughout the movie. It appears to be the standard Volscian infantry rifle.

A Volscian aims a Zastava M70AB2.

A Volscian fires a M70AB2 from a windowsill.

Aufidis's comrades hold M70AB2s as he and Coriolanus fight hand-to-hand.

A Volscian puts down his M70AB2 rifle.

A Roman Legionnaire can be seen wielding a SIG SG 552 carbine when Coriolanus urges his troops to attack.

A Legionnaire on the far left holds a SG 552.

A M76 is aimed by a Volscian sniper.

The sniper reacts as the Romans fire a rocket.

A Volscian on the far right holds a M76 as Virgilia walks away from Coriolanus.

A Volscian escorting Volumnia and Virgilia holds a Vektor R4 rifle, distinguishable by its bipod and lengthened handguard.

Vektor R4 assault rifle of the South African forces with 50-round magazine - 5.56x45mm

The Volscian in the middle of the crowd holds a R4.

A soldier can be seen firing a Zastava M72 machine gun in archival footage of the Yugoslavian civil wars that is used to portray the Roman-Volscian conflict.

A Zastava M72 is fired in archival footage.

Some Volscian soldiers wield Zastava M84 machine guns, which are distinguishable by their solid stocks.

A Volscian holds a M84 as Virgilia and her son enter the camp.

The NSV heavy machine gun can be seen mounted on the M-84 tanks of Roman forces. 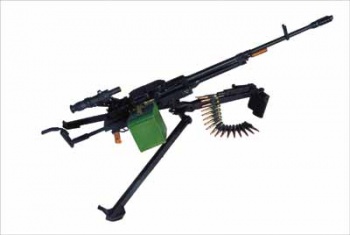 A NSV machine gun is seen as Melanius (Brian Cox) walks towards the Volscian lines.

Another NSV, as mounted on a T-72B; the footage is actually from the Russia-Georgia conflict of 2008.

A Browning M2 HB is seen mounted on a Humvee at a Volscian checkpoint.

A M2HB is mounted on the Humvee behind Tullus Aufidis and his men.

Roman legionnaires use a M80 "Zolja" rocket launcher to destroy a Volscian position during the battle in Corioles.

A legionnaire pulls out a M80 "Zolja".

The legionnaire prepares to fire the M80 at the Volscian position.

A legionnaire has an ARWEN 37 grenade launcher strapped to his back during the battle in Corioles.

A legionnaire rushes towards cover with an ARWEN 37 strapped to his back.
Retrieved from "http://www.imfdb.org/index.php?title=Coriolanus&oldid=937757"
Categories: