Bruce Willis with his Smith & Wesson Model 19 snub as Joe Hallenbeck in The Last Boy Scout (1991).

Bruce Willis wields a suppressed Beretta 84FS Cheetah as The Jackal in The Jackal (1997). 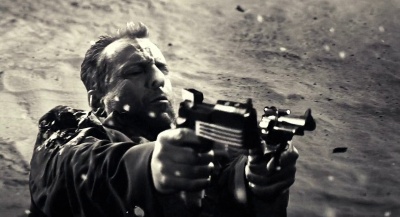 Bruce Willis is an American actor who first had success appearing as David Addison in the ABC television series Moonlighting. He would then rocket to superstardom with his role as NYPD Detective John McClane in the 1988 film Die Hard. He would then appear in several action film roles in such features as The Last Boy Scout, The Jackal, and The Fifth Element in addition to returning as McClane in four Die Hard sequels. He also would appear in such comedies as Blind Date and The Whole Nine Yards as well as such dramas as Pulp Fiction and Hart's War. With an acting career spanning four decades, Willis would retire from acting in 2022 after being diagnosed with aphasia. He also is the father of actress Rumer Willis.