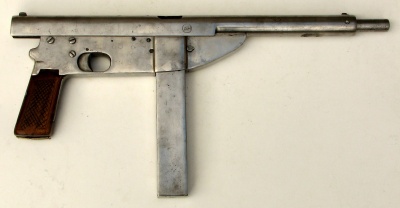 The Bechowiec-1 (also called the Beha, due to the "B.H" marking stamped onto the side; this is supposed to say "B.Ch", short for "Bataliony Chłopskie", or "Peasant Battalions", an underground resistance group for which the weapon was created, but no "C" punch was available) is a Polish submachine gun clandestinely built during the German occupation of Poland. It was designed by a Polish blacksmith named Henryk Strąpoć who'd dabbled in arms-making prior, having hand-made 3 pistols and a revolver; owing to his limited experience, he based the Bechowiec primarily on his work with Browning-style blowback pistols, thus creating the first ever closed-bolt, hammer-fired submachine gun, 23 years before the Heckler & Koch MP5. Only a small number were produced (approximately a dozen; sources vary); the majority of these were in 9x19mm Parabellum, though the last few were chambered in 7.62x25mm Tokarev.