The following guns are seen in the animated film Atlantis, The Lost Empire: 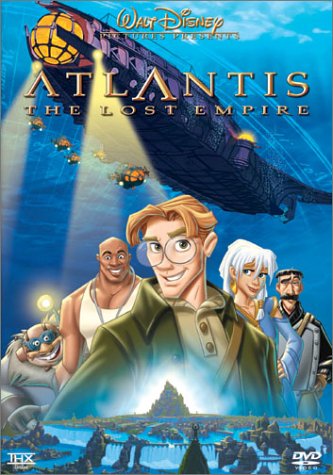 Lieutenant Helga Katrina Sinclair's weapon of choice is a Mauser C96 Broomhandle which she is seen with it throughout the film waving it around until the climax of the film where she finally uses it to great effect until it runs dry.

We all know it's cool to aim your gun at a superior with the finger on the trigger, of course.

Helga spins and plays with her Mauser C96.

Helga uses her Mauser C96 Broomhandle at the end of the film.

"You have a nice swim?" Rourke sitting with his Luger in hand.

Rourke carries his Luger as he talks about stealing the Atlanteans' power source.

The Luger cools down after Rourke shoots Kida's knife out of her hands.

Rourke cocks his Luger when he prepares to shoot the King if he does not tell him where the power source of Atlantis is hidden.

The Remington 1866 Derringer is very briefly seen in the hands of Wilhelmina Bertha Packard when the group casts over Milo when they reveal to be mercenaries. 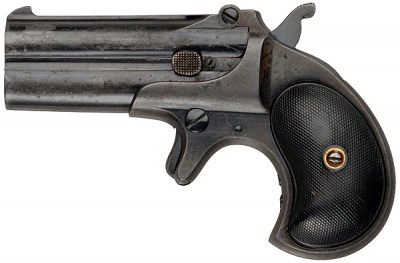 Packard with her Derringer.

Mole is seen with a submachine gun that weakly resembles the PPSh-41, fitted with a drum magazine when Rourke reveals to Milo that they are mercenaries, and during the entering of the Kings room. The funny thing is, the PPSh-41 wasn't available in 1914 and is an anachronism.

Mole stares at Milo while armed with his anachronistic PPSh-41.

All of the mercenaries, including Vinnie, carry Lee-Enfield No. 1 Mk IIIs.

A crate of SMLE rifles is opened up.

A mercenary with his SMLE before he chambers it.

Vinnie holds an SMLE when Milo discovers that everyone involved with the expedition are mercenaries.

A mercenary aims his SMLE at Kida as Rourke's way of convincing Milo to join the group.

A mercenary guards the Atlantean king with his SMLE.

The Double Barreled Shotgun, Cookie's weapon of choice, briefly seen when revealing to be a Mercenary and when entering the Kings room shouting "room service".

Group shot of the mercs, including Cookie with his Double Barreled Shotgun.

Cookie prepares to ride on an Atlantean vehicle while carrying his gun.

Seen at the climax of the film where the Atlanteans battle Rourke, Helga and the soldiers. Rourke fires a hand-held Lewis gun until it is shot out of his hand by an Atlantean's ship that is piloted by Vinnie.

Rourke blasts away with his Lewis gun at several attacking Atlantean ships...

...only to have it cut in half by an energy blast from Vinnie's Atlantean ship.

The Vickers machine gun is seen mounted on the back of the last surviving truck of the mercenaries, where two soldiers are mounting it, never seen being fired. Several mercenaries can be seen firing them during the Atlanteans' assault on Rourke's zeppelin.

The truck on the left has a Vickers machine gun.

A mercenary prepares to turn his Vickers towards an Atlantean ship.

The same mercenary fires his Vickers at Vinnie's Atlantean ship.

A Vickers machine gun mounted on the back of a truck is destroyed in the final battle.

An FPS view of a Vickers as the mercenary prepares to fire on the attacking Atlantean ships.

Helga's Flare pistol which she uses on two occasions, the first she fires it up the Volcano and the second firing it at Rourke and the Balloon with famous last words "Nothing personal". 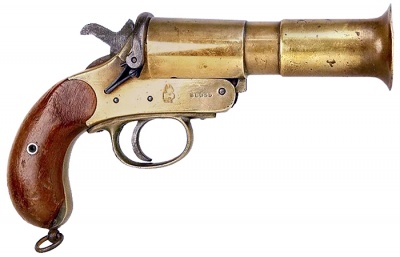 Helga draws out her flare pistol before hitting Mole to chamber it.

Helga with the flare pistol after firing it at the top of a mountain.

"Nothing Personal." Helga prepares to fire at the balloon.

An unknown machine gun is mounted on several trucks and planes (maybe a Browning .30 cal, a few years inaccurate).

A mercenary fires his 2 machine guns.
Retrieved from "http://www.imfdb.org/index.php?title=Atlantis:_The_Lost_Empire&oldid=1316318"
Categories: