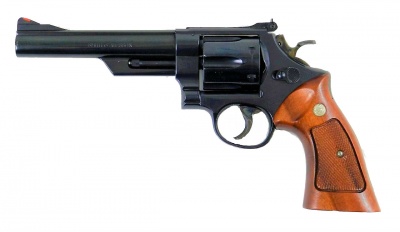 The Smith & Wesson Model 57 is a large frame, double-action revolver with a six round cylinder. It is Smith & Wesson's fine and high-end target revolver chambered for the .41 Remington Magnum cartridge. The Model 57 is roughly the same as a high-end Model 27 or 29. It is even the same weight as the Model 29. The intended target market segments included law enforcement agencies and civilian firearms enthusiasts. It was intended for law-enforcement because it had better ballistics than a .357 Magnum, but less recoil than the mighty .44 Magnum. A no-frills duty version was made and dubbed the Smith & Wesson Model 58. Despite being a very high-end revolver, the Model 57 never caught on with law enforcement as was intended, since the Model 57 was the same size and weight as the Model 29, which was already being carried by many departments. The Model 57 was eventually discontinued, though it remains popular amongst revolver collectors and enthusiasts of the .41 Magnum cartridge.

The Smith & Wesson Model 57 has been seen in the following: