Note: This page is added for firearms documentation, and many members of IMFDB do not support its message, which some may find offensive to veterans and military personnel.

Redacted is a 2007 Iraq War film written and directed by Brian De Palma. The film is fictional, although it is loosely based on the 2006 Mahmudiyah killings, in which a group of US Army soldiers raped a 14-year-old Iraqi girl and killed her and her family. The film, which received mixed reactions from critics and was a box office disappointment in its limited release, stirred up controversy, as many felt the depiction of US soldiers in the film was too harsh and did not paint a fair representation of US involvement in the Iraq War.

The following guns were used in the film Redacted: 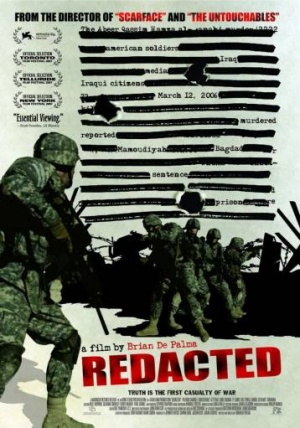 As in reality, the M4A1 Carbine is the standard-issue weapon of the US Army soldiers in the film, many of which are customized with optical gunsights, lasers, and foregrips. 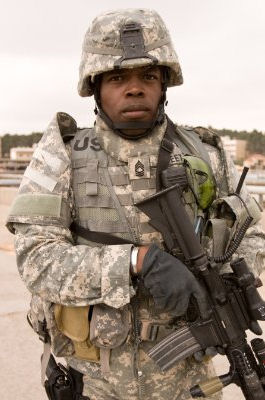 MSG James Sweet (Ty Jones) with an M4A1 Carbine fitted with a Trijicon TA31F ACOG, foregrip, and AN/PEQ-2. Note the proper trigger discipline and what appears to be a KIA bracelet on his right wrist. 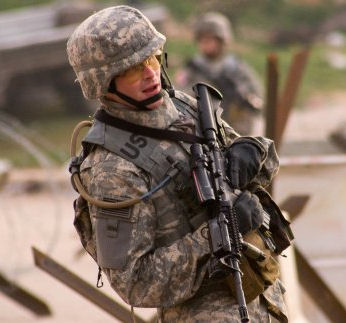 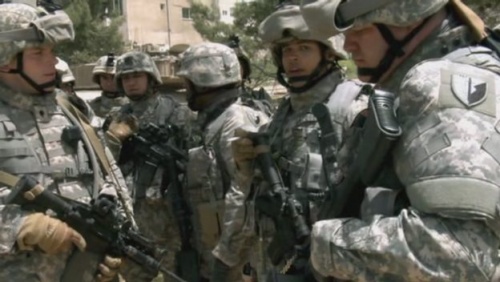 SGT Jim Vazquez (Mike Figueroa) tries to calm down his soldiers after they get upset about having their deployment extended. SPC Lawyer McCoy (on the far left), is armed with an M4A1 carbine. 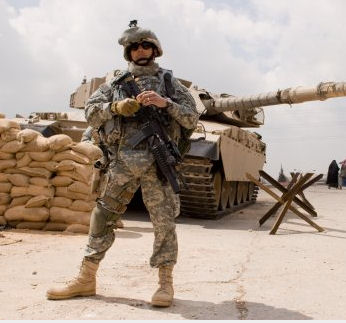 SGT Vazquez stands guard at a checkpoint with his M4A1 Carbine, fitted with an M203 grenade launcher. Note the Jordanian al-Hussein tank (an export version of the British Challenger 1, possibly standing in for an M1 Abrams) behind him, which is inaccurate as the US military never used this tank. 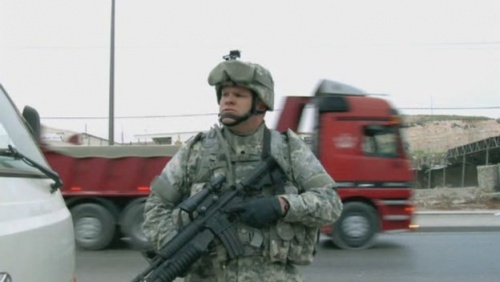 SPC B.B. Rush searches for PFC Salazar with his M4A1 Carbine, after he is captured by al-Qaeda in Iraq (AQI) members.

During the gang-rape sequence of the film, PFC Reno Flake (Patrick Carroll) disarms an Iraqi grandfather of his Norinco Type 56 after he attempts to defend his family with it. He then shoots and kills the whole family off-screen with it. 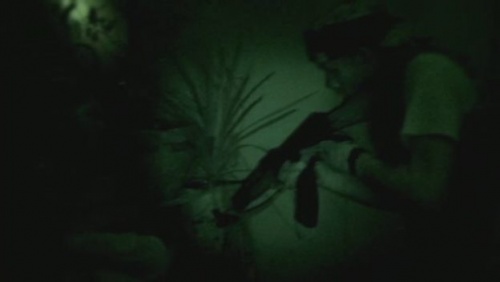 PFC Reno Flake armed with a Norinco Type 56 during the gang-rape incident, which he stole from an elderly Iraqi man.

Mujahideen Shura Council/Al-Qaeda in Iraq (AQI) members who capture PFC Angel Salazar in revenge for the killings of the Iraqi family are seen armed with AKM rifles. 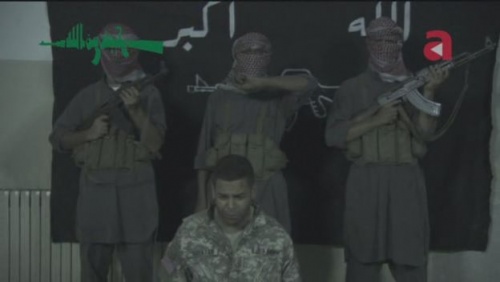 Mujahideen Shura Council/Al-Qaeda in Iraq (AQI) members, armed with AKM rifles, are seen with PFC Salazar shortly before they behead him on camera.

The standard issue sidearm of the US Army soldiers in the film is the Beretta 92FS, standing in for the M9. A drunken PFC Reno Flake (Patrick Carroll) uses his to threaten SPC Lawyer McCoy (Rob Devaney) when he tries to stop the gang-rape of the Iraqi girl. 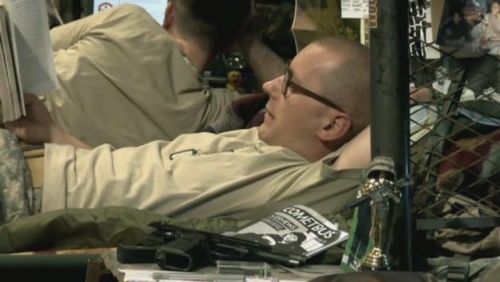 PFC Gabe Blix reads John O'Hara's Appointment in Samarra on his rack, next to his safely-unloaded Beretta 92FS. 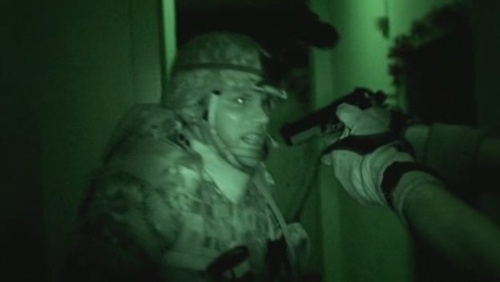 PFC Flake drunkenly threatens SPC McCoy with his Beretta after he tries to stop them from raping Farrah, a young Iraqi girl.

SPC B.B. Rush (Daniel Stewart Sherman) carries a FN M249-E2 SAW during the scene in which the unit learns that their tour has been extended. 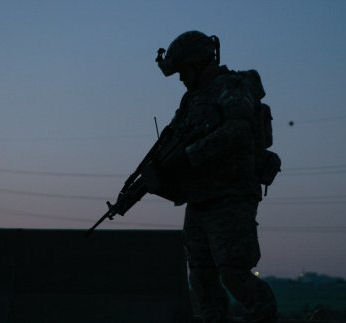 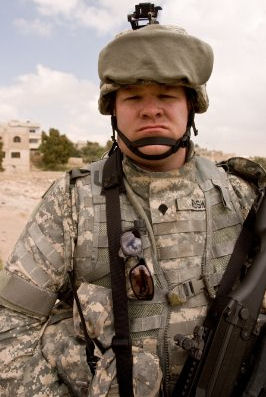 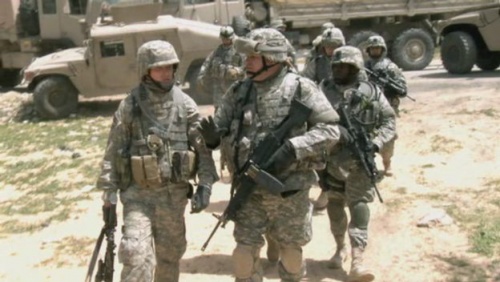 The platoon grudgingly walks away after a speech by their battalion commander, LTC Ford, who tells them that their deployment has been extended. SPC B.B. Rush can be seen, armed with his FN M249-E2 SAW

PFC Reno Flake (Patrick Carroll) uses a HMMWV-mounted Browning M2HB to shoot and kill a pregnant Iraqi woman when her husband tries to rush through a checkpoint in an attempt to quickly reach a hospital. 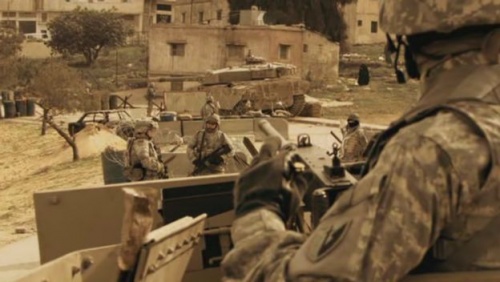 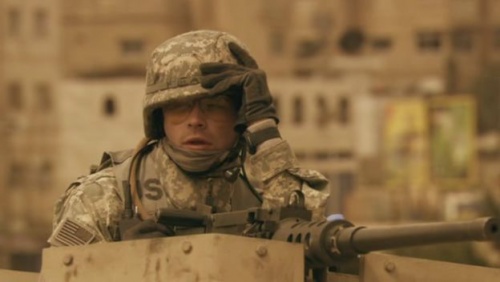 A tired and bored PFC Reno Flake mans a HMMWV-mounted Browning M2HB while on checkpoint duty.
Retrieved from "http://www.imfdb.org/index.php?title=Redacted&oldid=1274380"
Categories: