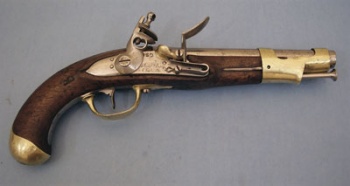 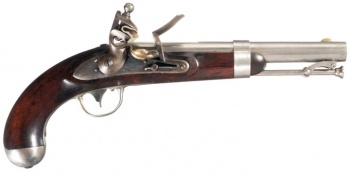 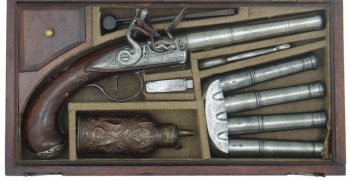 Nock Flintlock Pistol with a Duck's Foot multiple barrel attachment to fire simultaneous shots in a wide arc. The Duck's Foot attachment, named for its visual similarity to the toes and webbing of a duck's foot, was originally intended as an anti-mutiny weapon aboard wooden sailing ships, where a lone ship Captain might find himself up against numerous mutineers.

Introduced about 1630, the flintlock rapidly replaced earlier firearm-ignition technologies, such as the matchlock and wheellock mechanisms. It continued to be in common use for over two centuries, replaced by percussion cap in the mid 19th century and, later, cartridge-based systems. The Model 1840 U.S. musket was the last flintlock firearm produced for the U.S. military although there is evidence obsolete flintlocks were seeing action in the earliest days of the American Civil War. In fact, during the first year of the war, the Army of Tennessee (Confederacy) had over 2,000 flintlock muskets in service. While technologically obsolete, flintlock firearms have enjoyed a renaissance among black powder shooting enthusiasts and many fine flintlock rifles and pistols are being made today.

Note that any firing Flintlock Pistols in a live-action production are likely to be modern replicas since period flintlocks are unsafe to shoot and much more expensive.

The Flintlock Pistol and variants can be seen in the following films, television series, video games, and anime used by the following actors: 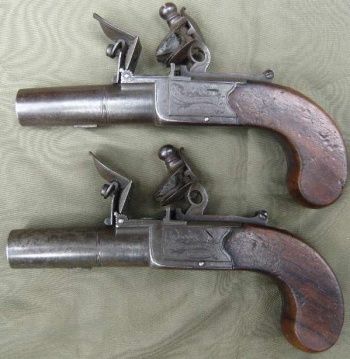 Pocket-sized Flintlock Pistols. Because Flintlock Pistols were occasionally carried in multiples to bypass their lengthy reload times, they allowed for possibly the earliest form of Akimbo shooting and/or the "New York Reload" technique. 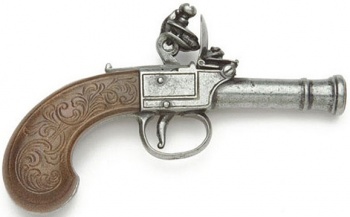 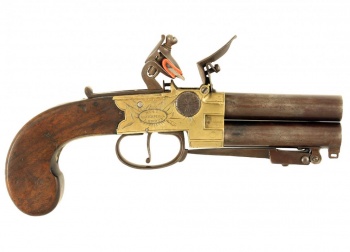 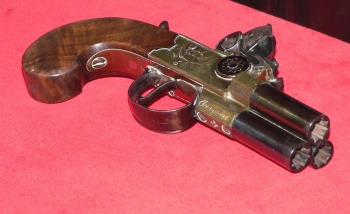 Three-shot tap-action pistol. Sequentially-firing barrels were one solution to the Flintlock Pistol's single-shot nature before revolvers were invented. 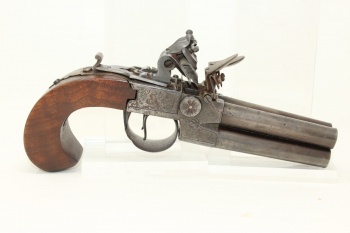 A sub-variant of pocket flintlock pistols with two, three, or four barrels. There were also rare versions with six and seven barrels. Their name comes from the fact, that after the first shot, the shooter taps a small lever on the left side of the pistol. After that, the next barrel can be fired once the pistol is re-primed and re-cocked. Some tap-action pistols also had the side-by-side barrels. In some case the barrels were screw-off, in other they are usual muzzle-loaders.

Not to be confused with the turnover pistols, having a rotating block of barrels (see below). 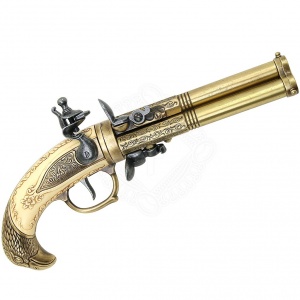 Kolser made replica of a three barrel turnover flintlock pistol, made in Augsburg in 1775 (hand-rotated). 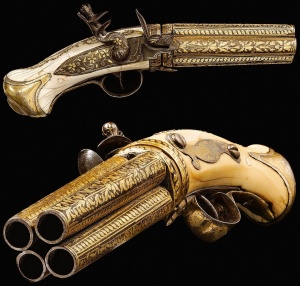 19th century Indian or Ottoman four-barreled flintlock pistol with ivory handle. This one uses the one pan for all barrels.

These predecessors of the pepper-box revolvers (the term "pepper-box" apparently appeared only in the 19th century) appeared around the middle of the 17th century in Europe, and originally had two barrels that were hand rotated. Towards the end of the 18th century, the three-, four-, and seven-barrel models appeared.